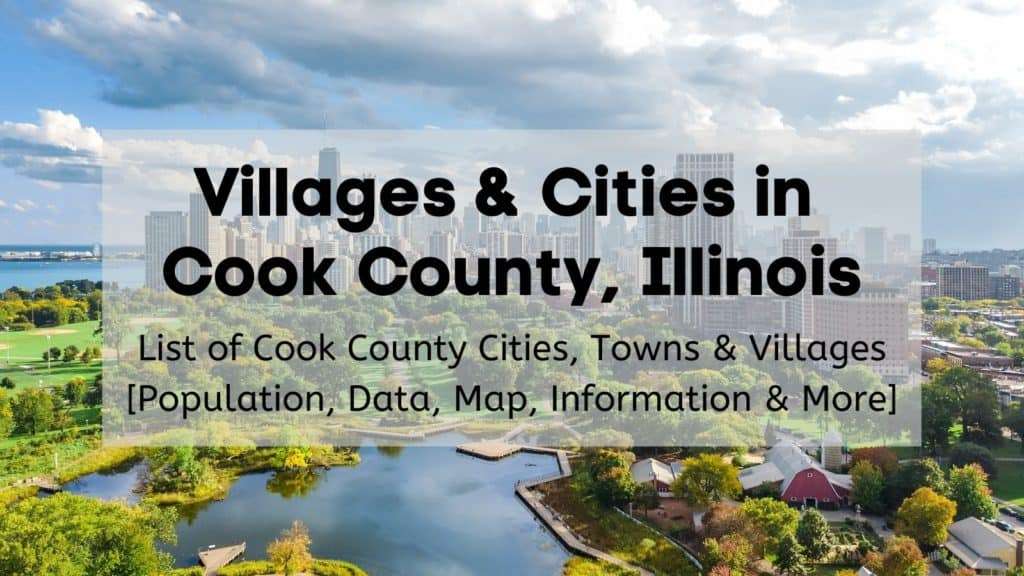 Are you thinking about moving to the Chicago area or are you just visiting northeast Illinois? Cook County is the largest and most populous county in Illinois and the center of the Chicago metro area, or Chicagoland. In addition to the exciting attractions of Chicago, Cook County is known for its beautiful scenery and outdoor recreation from its forest preserves, golf courses, and lake fishing to Lake Michigan with beach volleyball, kayaking, boating, and paddleboarding. While no other municipality in the county comes close to the size of Chicago, there are tons of fun communities to explore!

This guide will cover the ten largest villages, towns, and cities in Cook County, Illinois. What’s the difference between the three? In Illinois, virtually nothing. All three are incorporated municipalities.

Towns are Illinois municipalities that incorporated before 1872 when the Cities and Villages Act was passed. There are very few differences between villages and cities. A city has 6+ aldermen and a village have six trustees. All three municipalities have a similar recognition by the state and legal powers, but villages and cities vary slightly in how they are formed. We won’t cover census-designated places (CDPs) which are concentrations of people defined by the Census Bureau only for statistical purposes.

Here are the largest Cook County cities, villages, and towns according to 2020 Census data from the U.S. Census Bureau. 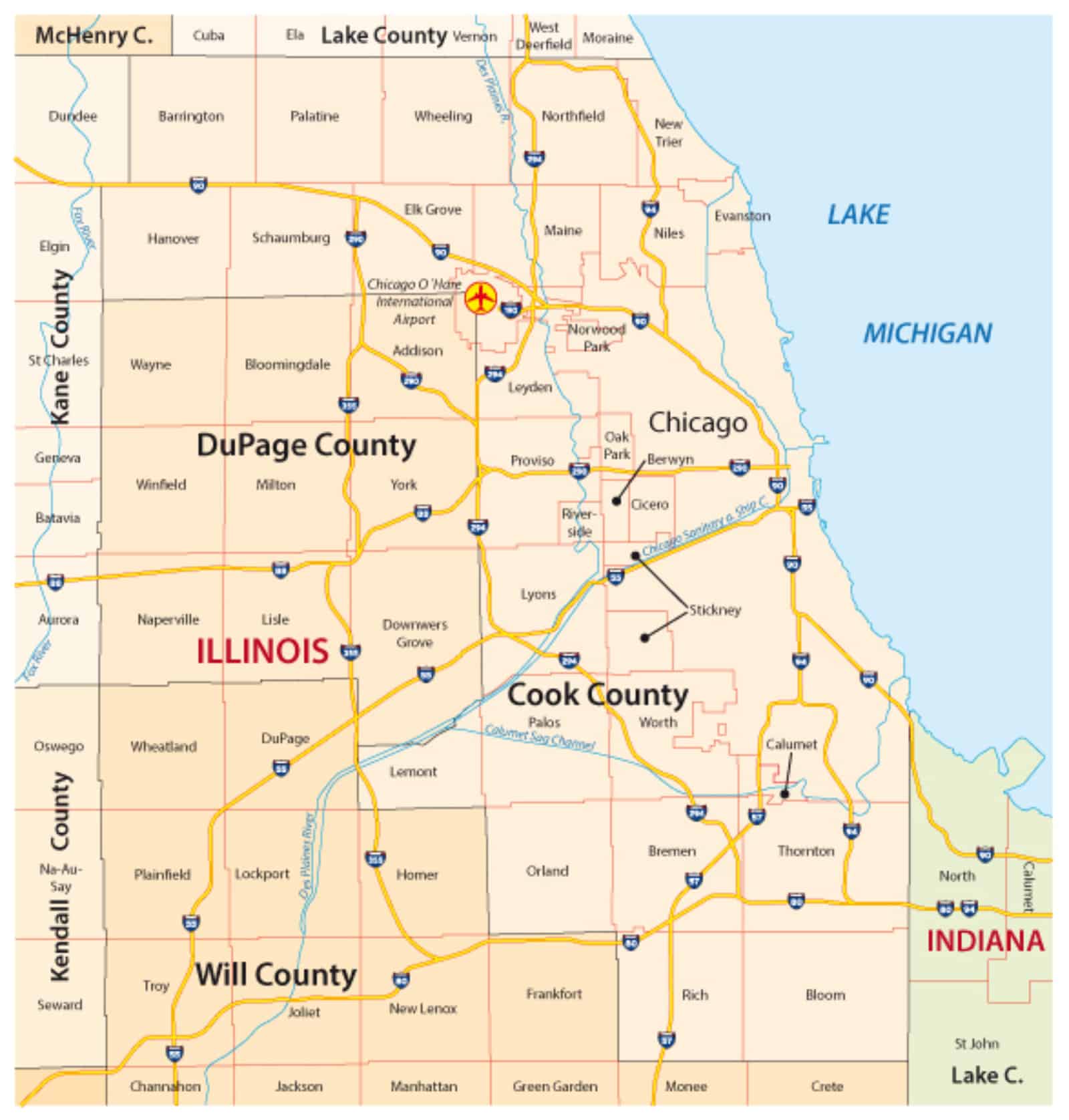 Incorporated in 1831 with a population of around 600 people, Cook County had more than 4 million residents just a century later, rivaling Paris! Cook County, IL is the sixth largest county in Illinois by land but the largest by total area with 42% of its total area comprised of water. There are close to 130 municipalities in the county. There are 24 Cook County cities, one town, and 111 villages. Outside of Chicago and Evanston – the only two independent cities in Cook County – the county is divided into 29 townships.

Cook County is anchored by Chicago and the greater Chicago metro area known as Chicagoland. The Cook County, IL population is larger than 28 U.S. states! 75% of all people in Illinois live in the Chicago area and 40% live in Cook County alone.

Where is Cook County, Illinois? It’s located in northeastern Illinois on the shore of Lake Michigan. It’s bordered by five “collar counties” that make up the Chicago metro area: DuPage, Kane, Lake, McHenry, and Will counties. 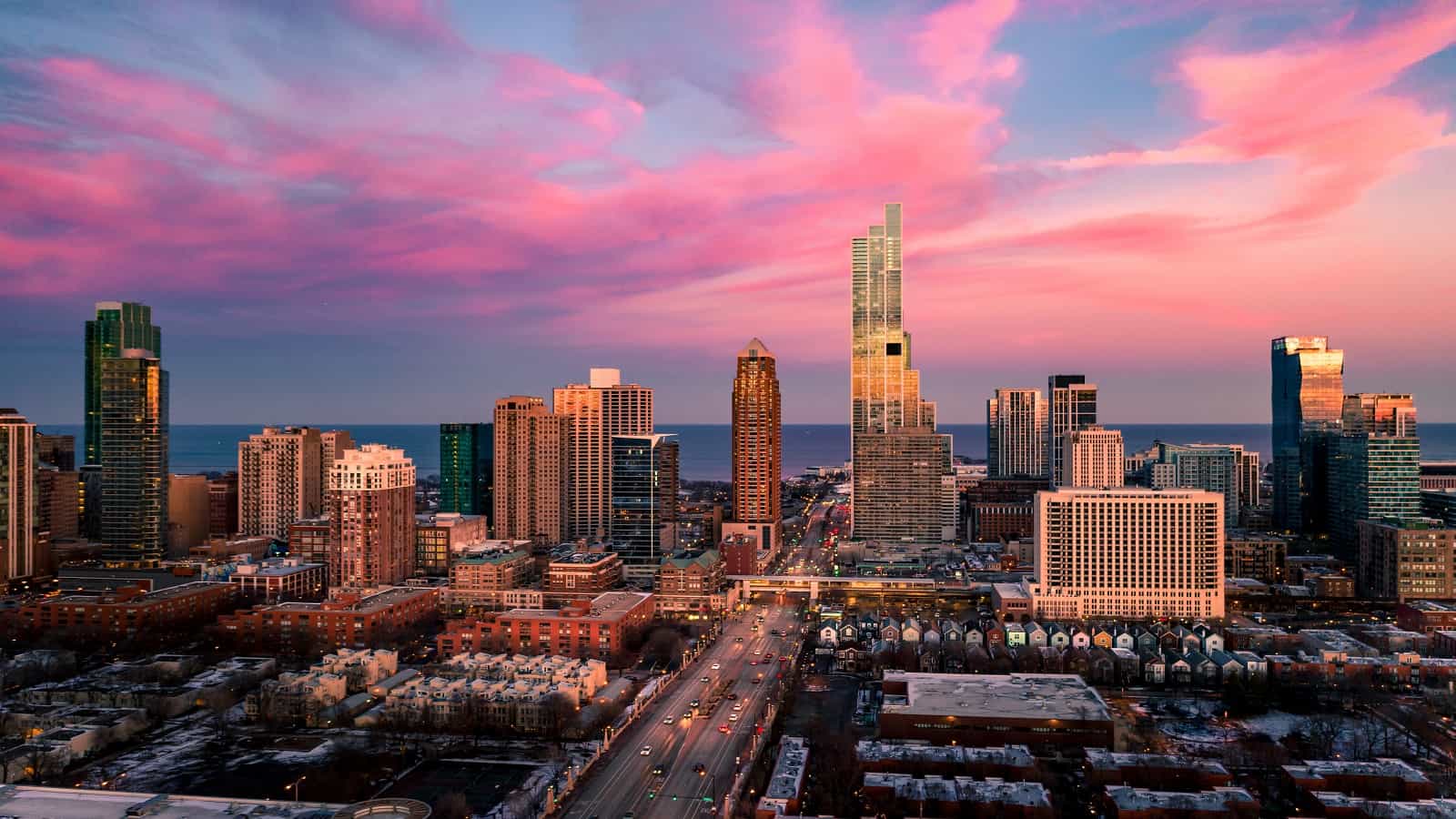 Chicago is the largest of cities in Cook County by population. It’s also the largest city in Illinois and the third largest in the U.S. after New York City and Los Angeles. The county seat of Cook County, it’s the principal city of the Chicago metro area with a population of 9.6 million.

Chicago sits on the shores of Lake Michigan and offers a great quality of life, a robust and diverse economy, and excellent universities like the University of Chicago, one of the world’s best and most selective universities. Chicago is also famous for its professional sports teams – including the Bears, Bulls, Cubs, and White Sox! – and world-famous attractions. Residents enjoy Lincoln Park Zoo, one of America’s oldest, Shedd Aquarium, one of the largest in the world, and Field Museum, one of the world’s largest natural history museums.

Check our complete guide to living in Chicago to learn more about the Windy City!

Elgin is the 6th largest city in Illinois and the second largest of Cook County cities, although part of the city is in neighboring Kane County. Elgin is about 35 miles northwest of Chicago and it was one of the fastest growing municipalities in Chicagoland and all of Illinois in the last decade.

Elgin is best known for its renovated downtown area with many clubs, lounges, new condos and townhomes, restaurants, art galleries, and a riverside promenade. Elgin is home to the Grand Victoria Casino, one of the first riverboat casinos in northern Illinois, and the Elgin Symphony Orchestra. Along with cultural attractions, Elgin boasts endless recreation and nature preserves, a small zoo, several golf courses, and the large Centre of Elgin rec center with a climbing wall and aquatic park. It’s one of America’s largest municipal rec centers!

Find out if you’ll like living in Elgin, IL with our complete guide!

Cicero is the only town in Cook County, IL, although it’s still equivalent to a city or village and only maintains its “town” designation due to the era in which it was incorporated. With just six square miles of area, Cicero is the most densely populated municipality in the county and the second largest suburb of Chicago.

Cicero is known for the Hawthorne Works Tower and the iconic St. Mary of Czestochowa, a stunning Polish Cathedral-style church. It’s also one of the safest places to live in Illinois!

Schaumburg is the largest of all villages in Cook County, Illinois. This northwest Chicago suburb is one of the fastest growing cities in Chicagoland and recently pushed Evanston down a spot on the list of Cook County cities by population, eking out ahead by just a few hundred people.

Schaumburg is one of the best suburbs in Chicago for families. Best known for the large Woodfield Mall, it offers endless outdoor recreation, cultural attractions, and entertainment including the LEGOLAND Discovery Center Chicago with a 4D theater and rides, The Water Works Indoor Water Park, and the adjacent Ned Brown Forest Preserve (Busse Woods), a massive park with trails and bridges over connected pools called Busse Lake.

Check out our complete guide to moving to Schaumburg, IL to see if it’s the right city for you.

Just 12 miles outside downtown Chicago is the gorgeous city of Evanston. It’s one of just two municipalities on this list of cities in Cook County that’s an independent city (along with Chicago). Much of its growth is attributed to the fact that it’s connected to Chicago by rail transit via the CTA’s Purple Line.

Evanston is famously home to Northwestern University, one of the top research universities in the world. Evanston is known for its diverse, socially liberal, and highly educated population. In 2021, Evanston became one of the first U.S. cities to approve a pilot guaranteed income for qualifying residents.

The village of Arlington Heights isn’t just one of the largest cities in Cook County, Illinois; it’s the most affluent with six-figure median household income. It’s also the largest incorporated village in the United States by population!

Arlington Heights is about 25 miles northwest of Chicago neighboring Palatine and Schaumburg. It’s best known for its history of horse racing with the Arlington Million, a Breeders’ Cup event, and the former Arlington Park Race Track. The village’s population has exploded in recent years thanks to the development of new businesses and condo buildings. Top attractions in the village include the Metropolis Performing Arts Centre, a professional theater company with more than 300 performances every year, and the picturesque Lake Arlington.

Check out our guide to living in Arlington Heights to see if it’s the right place for you to call home!

Palatine is known for its beautiful nature preserves and outdoor recreation. The Deer Grove Forest Preserve offers 2,000 acres of ravines, wetlands, and forests to explore with wildlife viewing and lake fishing. The Twin Lakes Golf Course & Recreation Area is the crown jewel of Palatine with a nine-hole golf course, driving range, kayaking, and fishing.

Skokie is one of the largest Cook County villages and just 15 miles outside downtown Chicago. Once known as the World’s Largest Village, Skokie has strong ties to Chicago with the same street grid system and service from the Chicago Transit Authority.

Skokie is known for its large Jewish community which was as high as 58% in the 60s. The Illinois Holocaust Museum & Education Center is located here. It’s also known for its beautiful parks and outdoor recreation with a recent Gold Medal for Excellence awarded for its parks and recreation management. Skokie is also home to Westfield Old Orchard, the third largest mall in Illinois.

The Cook County city of Des Plaines is just outside O’Hare International Airport and known for Rivers Casino, the last casino license awarded by the Illinois Gaming Board. This Chicago suburb is popular with families thanks to excellent private schools and amenities including the Mystic Waters Family Aquatic Center and Lake Park with boating, fishing, and golfing on the shores of Lake Opeka.

The village of Orland Park is the last on the top 10 list of cities in Cobb County, IL by population. Popular with commuters, Orland Park is close to O’Hare International Airport, I-80, US 45, Illinois Route 43, and U.S. Route 6. While the village doesn’t have a large commercial area aside from two main shopping centers, it does offer excellent outdoor recreation. Orland Park has more than 60 parks including Centennial Park Aquatic Center which has a large pool with water slides. Centennial Park is the gem of Orland Park with an ice rink in the winter, bike paths, skate parks, dog parks, and Lake Segdewick with fishing and kayaking.

Here is a complete list of cities in Cook County, sorted first by population, then other metrics from the US Census. Education Level is the % of the population that has finished high school. The Population Growth is from 2010 to 2019. If they exist, under Type, we have included cities, towns, villages, census designated places and more.

Map of Cities in Cook County

How many cities are in Cook County, Illinois?

There are 24 cities in Cook County plus one town and 111 villages. All three are incorporated municipalities with the same legal powers.

What is the most populous city in Cook County?

The largest city in Cook County is Chicago, home to 2.74 million people out of Cook County’s total population of 5.27 million.

What Chicago suburbs are in Cook County?

What are the wealthiest cities in Cook County?

The following are the richest Cook County cities by median household income.

Which of These Cook County Cities Is Right for You?

Does one of these cities in Cook County, IL sound like the perfect place to settle down? Once you have your move date on the horizon, give Federal Companies a call for a free moving quote. We’ll help you complete your relocation without the stress, hard work, and worry!

Please confirm deletion. There is no undo!