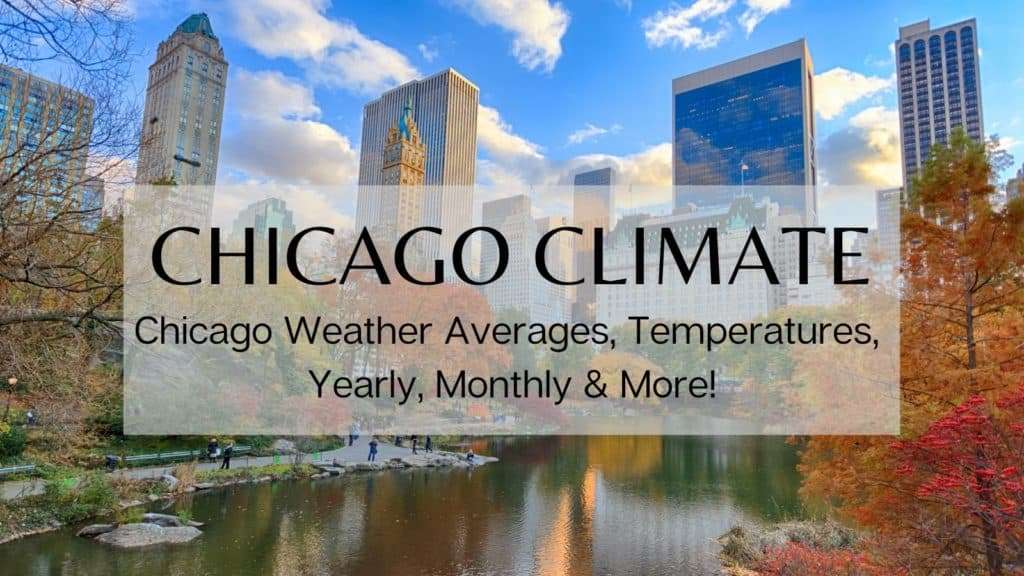 Chicago is famously known as the Windy City. Did you know this nickname isn’t actually a reference to the Chicago climate but instead a derisive comment from the 1890s referring to politicians blowing hot air? Chicago has a hot-summer humid continental climate with all four seasons. Winters are very cold and snowy while summers are extremely humid and hot. Throughout the year, Lake Michigan strongly influences the weather in Chicago.

Moving to Chicago or just visiting? Here’s what you should know about the climate in Chicago and what to expect by season and month.

When does spring start in Chicago? Spring begins in March and ends in May. Flowers start to bloom as the Chicago weather finally warms up. The parks and lakefront start to get busy as temperatures ease into the 50s then up to 70° by May.

What is there to do in Chicago in the spring? Be sure to catch the Chicago Cubs opening day at Wrigley Field! There are tons of events to enjoy during spring like the annual St. Patrick’s Day parade and the kick-off event when the Chicago River is dyed green. You’ll also love the Chicago Flower & Garden Show at Navy Pier and the Chicago Botanical Garden.

June marks the beginning of summer, the rainy season in Chicago which also comes with plenty of humidity and high temperatures. While the city gets fairly moderate precipitation spread throughout the year, July and August are the wettest months. Rainfall in Chicago is usually brief but very intense and may cause flooding.

Looking for things to do in Chicago in the summer? Put Taste of Chicago on your list. This 5-day event in July is the world’s biggest food festival! You’ll also love exploring Chicago’s parks, dining outside at the beachfront restaurants, and days spent at Navy Pier – one of the best places to see the 4th of July fireworks!

Autumn lasts from September through November. What is fall like in Chicago? It tends to be very pleasant with temperatures ranging from lows of 57°F to 34°F to average highs of 49°F to 75°F. You’ll still get plenty of rain during autumn, but less than summer.

The cooler weather brings beautiful fall colors on display at Lincoln Park plus a host of fun fall activities in Chicago. Visit pumpkin patches like the Pumpkin Patch and Walk at Lincoln Park Zoo and pick apples around Chicagoland like Kulper’s Family Farm. Chicago has exciting food festivals and other events in the fall like Oktoberfest in September.

When does winter start in Chicago? In December when temperatures drop rapidly but you’ll still experience a mix of snow and rain. Winter in Chicago is quite cold with lots of snow, but it gets less snow than other large cities by the Great Lakes. The most bitter cold comes in January and February. Winter officially ends in February.

Chicago winters are very cold and snowy, but there are still plenty of things to do in Chicago during winter! Head to Millennium Park for ice skating, head to the Dan Ryan Woods nature preserve for sledding, and explore the Lightscape night-time event at the Chicago Botanic Garden. You’ll even find fun date night ideas during the winter like The Gwen Hotel’s rooftop bar with a fun iceless curling rink and cocktails beside the fire pits.

The average high temperature in Chicago in January is 31.5°F with an average low of 18.2°F. January is the coldest month in Chicago and the snowiest. On average, you’ll get 11.5 inches of snow in January alone! There is some precipitation about 11 days during the month, 8 of which are snowy.

February has an average high of 35.8°F and an average low of 21.7°F. February still gets plenty of snow and a bit of rain. You’ll get around 9 inches of snow during the month over 9 days on average.

The average low in March is 30.9°F with an average high of 46.8°F. Temperatures are starting to warm up as spring rolls around. March still gets some snow, but it’s also likely to rain too. There are about 11 average days of precipitation, 4 of which are snowy days.

The average high temperature in May is 70.2°F with an average low of 51.6°F. May is the rainiest month in Chicago with an average of 4.13” of rain and 11 days of precipitation.

August has an average high temperature of 82.1°F. The average low is 66.2°F. Temperatures are just starting to cool off in August, the last month of summer, but it’s still humid. You’ll still get about 4 inches of rain on average over nine days.

The average high in September is 75.3°F while the average low is 57.5°F. September marks the beginning of autumn which brings less rain and cooler temperatures.

The average low temperature in November is 34.5°F. The average high is 48.6°F. Temperatures start to drop again in November as fall comes to an end. There are 11 days on average with precipitation, 2 of which are snowy.

The average low temperature in Chicago in December is 22.7°F with an average high of 35.3°F. The first month of winter brings an average of 8.7 inches of snow and 2.5 inches of rain over 11 days with precipitation.

Chicagoans are no strangers to extreme weather! The Chicago climate comes with bitterly cold winters and the lake effect can make the already very cold winter feel colder thanks to the wind-chill factor.

The winter of 2013-2014, for example, brought relentless cold and snow to the region. Even though there was no major snowstorm that season, Chicagoland received over 67 inches of snow – and that’s not even a record!

Chicago experiences extreme snowstorms, blizzards, and sub-zero temperatures on occasion, but some winters are worse than others. One of the most infamous was the 1967 Chicago blizzard which brought 36.5 inches of snow between January 26 and February 5 – an entire season’s worth. It was bad enough that some homes had their roofs collapse under the weight of the snow.

Chicago may also experience extreme heat. During the summer in Chicago, the temperature can reach dangerous levels thanks to a heat island effect and a high heat index. The famous Chicago Heatwave of 1995 killed 739 people when the official temperature reached 106°F but high humidity made the heat index up to 20°F higher than actual air temperatures.

The best time to visit Chicago is between April and May for warm but not hot temperatures and minimal rain or between September and October when the rain also tends to be light and temperatures still allow you to enjoy the outdoors. These months also coincide with some of the most popular festivals and events without the huge crowds of summer.

A post shared by Things To Do In Chicago (@thingstodoinchicago)

Just be aware that early spring weather in Chicago is unpredictable. You may get winter weather still in March and early April. During the height of summer, you can enjoy concerts and outdoor festivals as well as the beach, but the heat and humidity can be oppressive.

Chicago may be notorious for its cold winters, but you definitely get used to the cold while living in Chicago. The city also experiences all four seasons with plenty of warm weather and fall colors! Are you sold on experiencing the climate in Chicago year-round? Call Federal Companies for a free moving estimate ahead of relocating to Chicagoland.