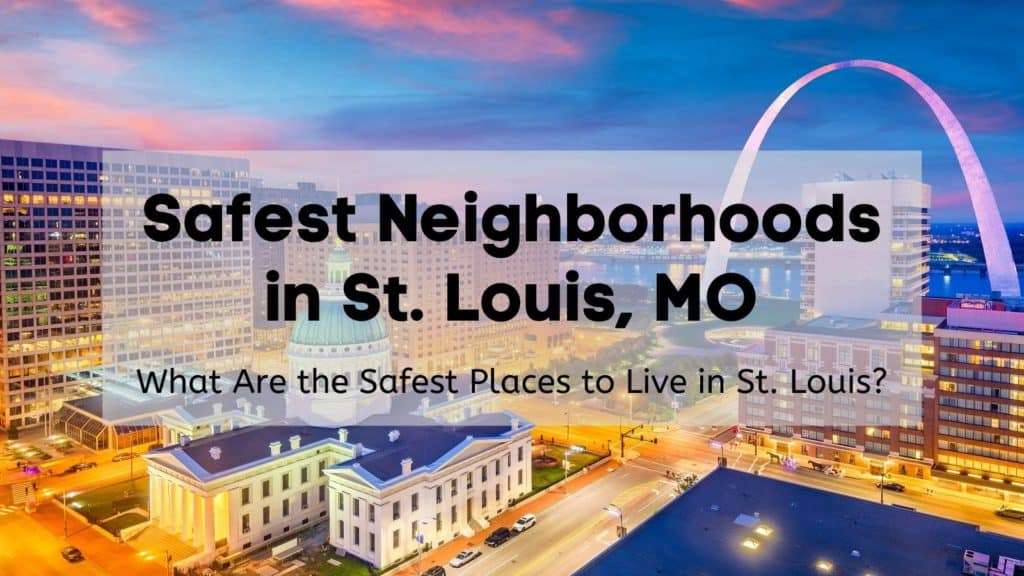 Is St. Louis a good place to live? If you’re thinking about moving to St. Louis, MO, you may be frightened by the city’s high crime rate. Just remember that, like many cities, crime is concentrated in a handful of areas. There are dozens of historic, exciting, and safe neighborhoods in St. Louis to explore, each with its own personality and charm. You’ll find that the STL is a good place to live with affordable housing, picturesque parks, and top-notch entertainment – but you’ll want to know which areas to avoid.

Here’s a complete guide to the safe places to live in St. Louis and an overview of the most dangerous neighborhoods you should avoid.

Before getting started, you may be curious about crime in St. Louis.

St. Louis may not be one of the safest cities in Missouri, but it isn’t the most dangerous! That designation goes to Springfield, MO.

Want to learn more? Check our guide to the St. Louis crime rate with more stats and insight!

What are the safest neighborhoods in St. Louis? Most of the safe places to live in St. Louis are west of Hampton Avenue in the South City area. This area is usually defined as the southern area of the city past I-44. By comparison, the largest St. Louis dangerous areas are in North City and Central STL.

Here’s a look at the safest areas in St. Louis for families, young professionals, retirees, and singles. Be sure to check our complete guide to the best neighborhoods in St. Louis, MO to learn more!

Hi-Pointe (Central City) – One of the Safest St. Louis Neighborhoods in Central District

Hi-Pointe is one of the safest neighborhoods in St. Louis if you want to live in the Central City area. It’s right off I-64 in the Dogtown area adjacent to Forest Park and the St. Louis Zoo. The community gets its name from its location at one of the city’s highest points and it’s home to Hi-Pointe Theatre, the city’s oldest operating cinema. Mostly residential, Hi-Pointe has about 800 homes plus apartments and condo buildings.

This South St. Louis neighborhood is an older, mostly residential neighborhood with the Foursquare, Craftsman, and storybook homes common in pre-WWII areas of the city. One of the safest places to live in St. Louis, Princeton Heights is next to Southampton, Holly Hills, and St. Louis Hills, also desirable, low-crime areas.

Located in the southwest corner of the city, one of the safe parts of St. Louis with a more suburban feel, Clifton Heights offers a perfect balance of affordable housing and low crime.

Located in the southwest area of the city, Saint Louis Hills has a very suburban feel with mid-century single-family homes in Modernist and Gingerbread styles. St. Louis Hills is one of the top safe neighborhoods in St. Louis for families thanks to its spacious homes, tree-lined streets, and low crime – but it comes at a price. It’s one of the most expensive neighborhoods in the city.

Home to about 10,000 people, Lindenwood Park is far from downtown in the south-southwest area of the city in the hills. The neighborhood has some commercial areas with shops, but it’s mostly residential with quiet streets and brick homes mostly built in the 1930s to 1950s. The neighborhood is overwhelmingly owner-occupied single-family homes.

You’ll find some commercial activity along Watson and Hampton including many Italian restaurants adjacent to The Hill, St. Louis, a neighboring Italian-American neighborhood.

Despite being mostly residential, Lindenwood Park is very densely populated with more than 6,300 people per square mile!

Southampton (South City) – Located in One of the Safest Areas in St. Louis Close to Attractions

Southampton is one of the best places to live in South St. Louis. You’ll find a large array of housing options including bungalows, Craftsman, and Hansel & Gretel homes, most of which are stone and brick homes built in the 1920s to 1930s.

Located in one of the most picturesque safe parts of St. Louis, Southampton was long a community of German immigrants before a more recent wave of artists and younger residents. Southampton has traditionally been home to many police officers and firefighters with rising home prices that have pushed it into the upper middle class.

Along with its low crime rate, Southampton offers easy access to top destinations and attractions with a 9-mile commute to downtown and minutes to Forest Park and the Missouri Botanical Garden.

Northampton (South City) – One of the Most Affordable & Safe Places to Live in St. Louis

Northampton is the larger neighborhood next to Southampton in Southwest City, one of the safest neighborhoods in St. Louis, MO. Home to Tilles Park, the neighborhood is bounded by Chippewa St, Hampton Ave, and Kingshighway Blvd, all three of which offer shopping, restaurants, and entertainment for the community. Like Southampton, Northampton offers a great location close to the city’s best parks and the South City YMCA, but Northampton is more affordable.

Soulard, St. Louis is one of the most historic and densely populated areas of South St. Louis. This famous neighborhood offers an urban feel thanks to its dense population, yet it maintains its historic charm that was lost to revitalization in other areas.

Soulard was the first neighborhood in the city and it’s home to Soulard Farmers Market, a community cornerstone established by the Soulards in 1770 while surveying for the King of Spain. The neighborhood’s strong German brewing history is still apparent with over 200 restaurants, bars, and boutiques dotting its streets.

Most Dangerous Parts of St. Louis

Areas of St. Louis are usually grouped into categories including South City and North City. Downtown and a handful of Central STL neighborhoods have the most crime along with several neighborhoods in North City. You’ll find a number of South City neighborhoods in St. Louis with high crime rates, but in this area of the city, safety and crime vary significantly from one street to the next. As a general rule, the farther north past Ferguson and the closer to Illinois to the east you go, the higher the crime rates.

The city has a reputation for high crime, especially violent crime related to St. Louis gangs. It’s important to put crime in St. Louis in context, however. According to Richard Rosenfeld, University of Missouri-St. Louis criminology professor, the St. Louis murder rate and violent crime give the impression that the entire city is unsafe but, “It’s very high in a few neighborhoods on the north side, and in and around Dutchtown, and hardly anywhere else.”

Here’s an overview of the St. Louis dangerous areas you should be aware of whether you’re visiting or relocating to the area.

St. Louis violence is notorious, but many areas of the city are safe despite the high St. Louis crime rate. A handful of neighborhoods account for a disproportionate share of violent crime while many communities in south and southwest St. Louis are far safer than the national average!

What areas of St. Louis are dangerous?

As a general rule, the north side of St. Louis and downtown are the most dangerous parts of St. Louis. There are also some very localized high-crime areas on the south side.

What are the safest neighborhoods in St. Louis?

As you can see, the high overall crime rate for the entire city shouldn’t discourage you from settling down in St. Louis. You’ll find many safe neighborhoods in St. Louis perfect for millennials, families, young professionals, and singles that offer everything from great parks and restaurants to good schools and walkability.

Are you getting ready to relocate to or within St. Louis, Missouri? Give us a call today at Federal Companies to find out how we can give you a worry-free moving day and get started with a free, personalized estimate.