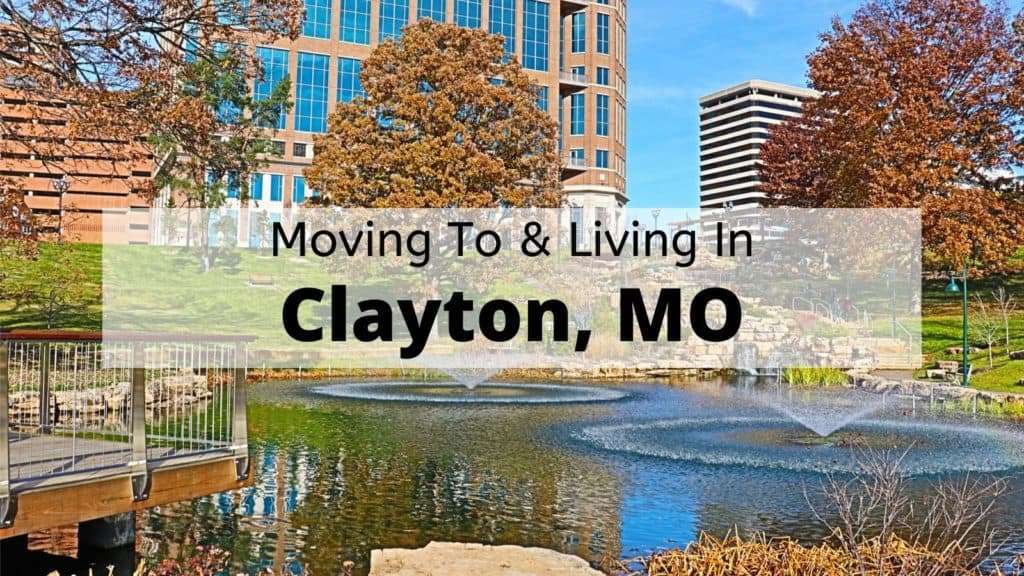 Is Clayton MO a Good Place to Live? [2022] | 🙆‍♂️ULTIMATE Moving to Clayton Tips

Bordering St. Louis on the west and located in St. Louis County is the beautiful city of Clayton, which is rather ironically the seat of the county rather than St. Louis itself. Clayton is known for being an incredibly affluent and cultured portion of the wider St. Louis metropolitan sphere, attracting the well-to-do from all over, and is also the site of many of St. Louis’ most famous cultural events. Initially organized as a sparse and backwater settlement around the then equally sparse St. Louis, the area was named for Ralph Clayton in 1877, and experienced bursts of growth during the Baby Boom, which is why many prominent examples of mid-century modernist architecture still stand around the community. This community has loads to offer for the cultured individual!

Cost of Living in Clayton, MO

It should be of little surprise that an area as affluent and hip as Clayton has a high cost of living, with the cost of living being 57% higher than the average in the United States, according to Bestplaces. The median home price in Clayton is $633,400, which is nearly four times the average Missouri home price of $157,200. Upon moving to Clayton, one can expect to pay more than the average for groceries and, of course, housing. In terms of renting in Clayton, one can expect an average of $2,244 per month, an incredibly hefty (but well worth it!) price.

According to the Economic Policy Institute, a family of four will need a yearly income of $80,992 to live here.

Seeing the prices of average goods in Clayton is a good way to understand how hard it will be for you to live there. Check out these everyday expenses for Clayton, provided by Numbeo.

Despite being a relatively small community, the affluent nature of Clayton means it has plenty of interesting sub-communities with unique features. See a few of these excellent neighborhoods below:

For the most part, your choice of neighborhood will be dictated by what you want to be closest to. The downtown area is where most of the exciting stuff happens, and where many of the best restaurants are. Other neighborhoods include Old Town, Tanglewood, and a portion of Washington University.

If you want to make yourself a part of any of this community, you should check out the latest listings for homes for sale in Clayton, MO.

If you are interested in renting, then take a look at some of the apartments in Clayton.

Missouri is the deep South, especially around St. Louis, so be prepared for humidity and rain, but also some snow during the winter. You can expect lows of 23 degrees Fahrenheit during the winter months, and highs of 89 degrees Fahrenheit during the summer months. Clayton gets more than the average amount of rainfall when compared with the rest of the United States, with 43 inches per year as compared to 38. Meanwhile, Clayton experiences less snowfall than the national average of 28 inches, with only 16 inches annually. The best times to visit Clayton, in terms of comfort rating, are May and September.

A post shared by Altair at the Heights (@altairheights)

Things to Do in Clayton, MO

When you’re dealing with a community as culturally refined as Clayton, you can be assured that there’s plenty to do and see! Check out great shopping in the community like the Richmond Center for all your shopping needs! You should also check out some of the best things to do in Clayton, MO below:

The oldest and most expansive park in the city of Clayton, Shaw Park’s charm needs to be seen to be believed. A perfect place to spend a day outdoors, and it has plenty of great play areas for the young ones!

While plenty of fantastic museums exist very close by to Clayton, Hanley House is the only one that can boast a location inside Clayton itself. A home built in 1855, it now hosts period furniture and exhibits on what life was like during the city’s peak.

Places to Eat in Clayton, MO

Alongside its host of things to do, Clayton is also home to plenty of great eats! Check out some below:

What good would any city be without an excellent Italian place? Lucky for the prospective Clayton resident, that’s just what Pastaria is! Enjoy Italian food in a modern trattoria with an open kitchen.

Sauce on the Side

Sauce on the Side is precisely the sort of hip and aesthetically unique restaurant that keeps people coming to Clayton. A local Missouri and Indiana chain, this joint specializes in delicious calzones.

Clayton is served by the Clayton Public School District, which has 80% of its schools rated as “Above Average” by Greatschools. Some of Clayton’s wonderful schools include Glenridge Elementary School, Wydown Middle School, and Clayton High School. Clayton’s schools are excellent, and your child’s education will be the least of your worries here!

Students and others in Clayton are served by the Mid-County branch of the St. Louis Public Library system.

Those planning on making a living in Clayton will have opportunities in many fields, according to Payscale. The most popular positions of employment are Data Analyst, Project Manager, and Information Technology Manager. The most popular employers in Clayton are Centene Corporation, Barry-Wehmiller, and Enterprise Bank and Trust Company. The average salary for a worker in Clayton is $67k a year, while the average hourly wage is $19.82.

If you’re planning on living in Clayton, working in high paying industries like tech or finance are your best bet. Check out the latest listings for jobs in Clayton, MO here.

Explore Clayton’s large variety of things to do, places to eat, and more with this map!

Clayton’s zip code is 63105, while the area code is 314. If you want to commute from Clayton to St. Louis, it will be precisely as short as you’d expect, with an eight mile drive that’ll take 12 minutes in ideal conditions. Clayton’s time zone is Central Standard Time, and sits at an elevation of 564’. The size of Clayton is only two and a half square miles, and the nearest airport is the St. Louis Lambert International Airport. The mayor of Clayton is Michelle Harris.

Seen all that Clayton has to offer, and want to move there? Give Federal Companies a call at 309-690-0000! Our Clayton moving team is sure to make your relocation an exponentially easier process! Call now or fill out our online form for a free quote!