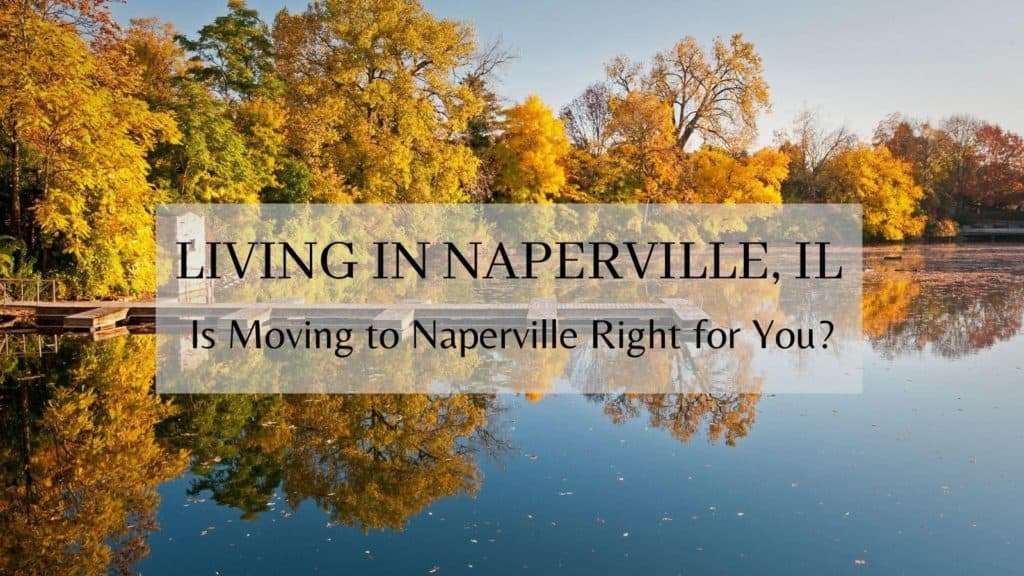 Living in Naperville IL [2022] | Is Moving to Naperville Right for You? {Data, Tips, Info}

Naperville is an affluent Chicago suburb with a median household income of $114,000 and a robust economy centered on healthcare, research, tech, and energy. Naperville isn’t just one of the safest and most educated cities in the United States, it’s also one of the Midwest’s wealthiest cities and one of the richest in the U.S. Located just 33 miles southwest of Chicago in DuPage and Will counties, Naperville has a population of 148,000. What is Naperville known for? The Naperville Public Library, named the best in the US; the Millennium Carillon, one of the largest in the world; and the top-rated DuPage Children’s Museum which receives over 300,000 visitors every year. If you’re considering moving to Naperville, Illinois, be prepared to find out why Naperville is a great place to live!

The population of Naperville is 148,000 with a racial and ethnic composition that’s 77% white, 15% Asian, 5% African American or black, and 5% Hispanic. Naperville has more Asian residents than any other Chicago suburb with immigrants from India, Pakistan, China, and Korea. The Asian population of Naperville has exploded over the last decade and today the city is home to the Mall of India, the Patel Brothers grocery chain specializing in ethnic Indian and Pakistani foods, and Raja Foods among other ethnic shopping options.

The average age in Naperville is almost 39, a bit higher than the U.S. average, with a very educated population. One study found Naperville is among the top 10 most educated cities in America: 71% of residents over 25 have a college degree!

Curious about the Naperville climate ahead of moving to Naperville, Illinois? You’ll get all four seasons with a hot-summer humid continental climate. You can expect a climate that’s pretty average for the U.S. with 39″ of rain and 29″ of snow per year and precipitation about 120 days per year. About 5 months out of the year are very comfortable with temperatures between 70 and 85 degrees and average highs of 84 in July. Only 8 days per year top 90 degrees. During January, nighttime temperatures average 15 degrees.

One of the things that makes Naperville, Illinois a great place to live? Its top-rated schools! Naperville has two public school districts: Naperville Community Unit School District 203 and Indian Prairie School District 204. Both districts have many high-performing schools that far exceed the state average with all three high schools in Naperville rated 10/10 by GreatSchools.

If you’re thinking about pursuing a degree after moving to Naperville, there are plenty of colleges and universities nearby! There’s campuses of Northern Illinois University, Northwestern College, Governors State University, the College of DuPage, and North Central College.

What Is the Cost of Living in Naperville?

Here’s what you’ll pay for common expenses in Naperville according to Numbeo:

Naperville is generally more affordable for renters than buyers. The average home price in Naperville, IL is $415,000 or $165 per square foot compared to the national average of $227,000. You can get an idea of what your budget will get you by searching online for Naperville, IL homes for sale.

With one of America’s most educated workforces, it’s no surprise that Naperville has a thriving economy with many employment opportunities. Located in the Illinois Technology and Research Corridor, Naperville’s economy focuses on research, tech, healthcare, and manufacturing. This robust economy helped Naperville become one of the country’s fastest-growing cities in the ’90s.

Top employers in Naperville include:

The average salary in Naperville is $67,000 with an average hourly pay rate of $18.38 according to Payscale.

What type of lifestyle do you want to lead while living in Naperville? There are neighborhoods for everyone from family-friendly subdivisions in Naperville to the action-packed downtown and luxury condo buildings.

A post shared by The Kim and Katie Group (@kimandkatielivefromnaperville)

Love to be near the excitement? Downtown is a cool place to live in Naperville with great bars and restaurants at your fingertips. There are many new luxury condominiums downtown that, while expensive, offer amazing amenities, great walkability and public transit, and a fun nightlife right outside your door. OneNineteen on Main is one of Downtown Naperville’s latest additions with sleek, modern amenities like hardwood floors, spacious balconies, a fitness center, and a clubhouse.

Naperville has dozens of popular subdivisions and master planned communities to explore as well if you prefer more space. Hobson West is one of the most affordable neighborhoods in Naperville with about 1,000 people and most homes built in the 1980s. Prices are usually $380k to $600k. A newer community is Ashwood Creek with homes built between 2005 and 2018 and median prices of $600k.

Naperville is even home to 55+ communities like Ashwood Crossing which has single-family homes and duplexes and a median home price of $400k. The community has over 100 homes with maintenance-free living, walking paths, and a pond.

Fun Things to Do in Naperville, IL

DuPage Children’s Museum is one of the best things to do in Naperville with kids of all ages. The museum features interactive exhibits where kids can explore, play, create, and build.

One of Naperville’s most famous attractions is Naperville Riverwalk, an urban park with an ice rink, playground, paddle boats, and more. Originally built by residents to commemorate Naperville’s birthday, it’s now known as the Crown Jewel of Naperville and one of the most beautiful parks in the Midwest.

What are you in the mood for? While living in Naperville, IL, you may have a tough time deciding where to go for dinner with hundreds of 5-star-rated restaurants! From fresh seafood, tapas, and Chicago-style pizza to authentic Indian, Korean, and Japanese cuisine, here are some of the top restaurants in Naperville you’ll love.

Celebrating a special occasion? There’s no better place than Mesón Sabika, one of Naperville’s finest restaurants with Spanish tapas served in an historic mansion.

Does Naperville, IL sound like a dream come true? If you’ve settled on this safe and affluent Chicago suburb, call the experienced Naperville movers at Federal Companies today for your free moving estimate. We’ve served the Chicago Metro area for 105 years and look forward to helping you with moving to Naperville without the stress.