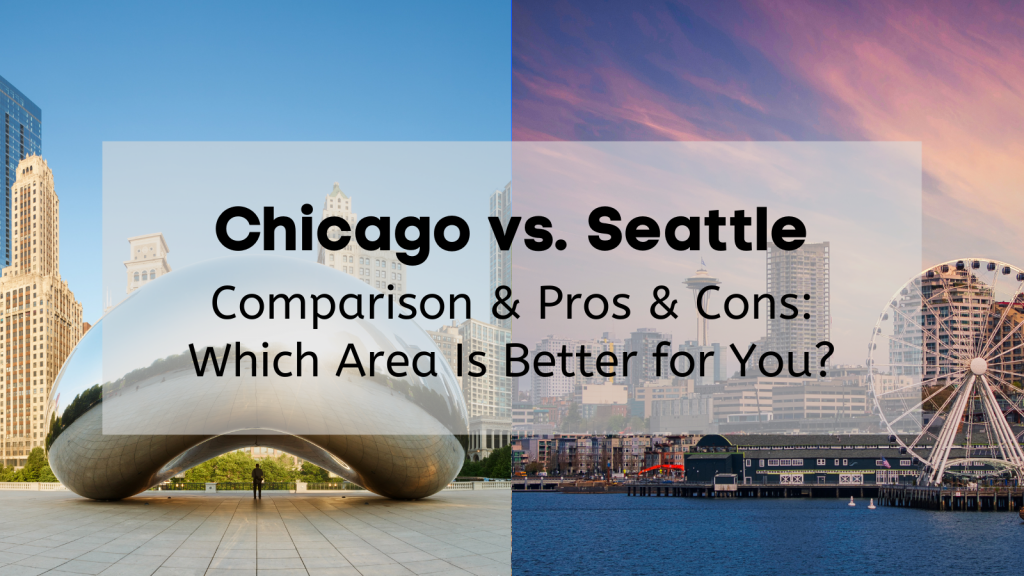 Chicago vs Seattle 🏆 | Which Comes Out Ahead: Chicago or Seattle? Pros & Cons, Cost of Living & More!

Are you trying to decide between moving to Chicago or Seattle? Both of these beautiful cities have traits that make them great places to live. With each city having its pros and cons to living in them, knowing the differences between Chicago and Seattle are essential to choosing the right place for you and your family.

Chicago is the largest city in Illinois and is even the third largest city in the United States. Located in Cook County, IL, Chicago is near the shore of Lake Michigan, and the surrounding cities are Oak Park, Evanston, Elmhurst, Naperville, and Aurora. A few iconic landmarks in Chicago include: Millennium Park, the Navy Pier, Chicago Riverwalk, the Lincoln Park Zoo, and the Magnificent Mile.

Then over 2,000 miles west, Seattle is the largest city in Washington State and the Pacific Northwest region. It’s considered a thriving LGBTQ+ community and is a tech hub. Seattle is part of King County, and the surrounding cities are Bellevue, Redmond, Kirkland, Tacoma, and Everett. A few iconic landmarks in Seattle include: the Space Needle, Pike Place Market, and Ballard (Hiram M Chittenden) Locks.

Now, you might be wondering how to choose between Chicago and Seattle, and the simple answer is by comparing and contrasting the advantages and disadvantages of the two cities.

Pros And Cons Of Living In Chicago vs. Seattle

Are you curious about which city is superior to the other? We’re breaking down the strengths and weaknesses of both Chicago and Seattle to help you determine which city is better for your current needs.

If you love to explore your own backyard, the benefit of living in Chicago is that you’ll never run out of places to see and experience. Some of the most popular attractions are the WNDR Museum, 360 Chicago, Museum of Ice Cream, Skydeck Chicago, Field Museum, Shedd Aquarium, Buckingham Fountain, and Cloud Gate.

Besides exploring, some additional benefits include having a great food scene, diversity, culture, freshwater beaches, and finding a home for a reasonable price.

Chicago is considered one of the best places to live in Illinois and is close to the prestigious Northwestern University. Chicago’s total crime rate per 100k is lower than the national average by 27.3%.

While Chicago is a walkable city, getting around the city of Chicago is still terrible. It has heavy traffic, and not as many public transportation options as Seattle. In addition to the heavy traffic, you have to drive a long way to get to the mountains or the beach. Plus, the violent crime rate is higher than the national average, although there are still plenty of safe neighborhoods in Chicago.

One of the main benefits of moving to Seattle is the endless things to do and places to explore. Some of the most popular attractions for both tourists and residents include: the Seattle Aquarium (home to the Seattle Great Wheel), Chihuly Garden and Glass, Discovery Park, The Museum of Flight, Kerry Park, Seattle Center, and Woodland Park Zoo.

In addition, Seattle has excellent public transportation, but it’s also a very walkable city–you can easily live without a car. It’s close to nature, has plenty of career opportunities, has no state income tax, has a BIG food scene, and has some of the best coffee in the US.

Speaking of a food scene, if you’re a foodie, then make sure to check out these popular Seattle restaurants: The Pink Door, Shaker + Spear, The Capital Grille, Spinasse, Tilikum Place Cafe, Six Seven Restaurant, and Le Pichet.

The cost of living in Seattle is terrible. It’s 67.8% higher than the national average. While, on average, you do make more money than in Chicago, you will need to budget wisely to ensure you can afford to live here. And the total crime rate is above the national average, but there are still plenty of safe and family-friendly neighborhoods.

Comparisons Of Chicago vs. Seattle

When you compare Chicago and Seattle, Chicago has a higher population than Seattle, but despite the difference in the number of residents, the percentages between females and males are similar. In fact Chicago is almost 2 million population larger than Seattle. The median age is the same for both cities, and it tends to lean towards a younger age group–making both cities perfect for young professionals.

The Cost Of Living In Chicago vs. Seattle

Chicago is a more affordable place to live when compared to Seattle. While both are above the national average for Cost of Living, Chicago is less expensive because it’s only 7.4% higher in comparison with Seattle, being 67.8% higher than the national average. In addition, according to the Economic Policy Institute, if you have a family of four, you’d need $15,022 more to live comfortably in Seattle than you would in Chicago.

While the weather during the winter can be similar at times between Chicago and Seattle, there is still a big difference in climate throughout the year. For example, Seattle gets a lot more rain than Chicago, versus Chicago gets 4x the amount of snow as Seattle. Depending on the type of weather you prefer can help you decide which city you’d want to call home.

Seattle is the leading city and is ranked #1 for public transportation compared to other US cities, so if you don’t have a car, Seattle is the perfect city for you.

Seattle has a lower unemployment rate than Chicago and the national average. And the average salary in Seattle is $11,000 more than in Chicago. Surprisingly, Chicago’s top employers are all within the city, whereas Seattle’s top employers are in the private sector.

Overall, when compared with Chicago, Seattle has a better economy because it has a higher salary and a lower unemployment rate.

Sport teams are common in both cities, so if you’re into watching the big games, there are options in both Seattle and Chicago!

Chicago vs Seattle: Where Are You Moving?

Regardless if you choose to move to Chicago or Seattle, Federal Companies is the best team of movers. For the past 107+ years and 200k customers served, we have been the top-rated moving company. Call us today at (309) 690-0000 for a free estimate!