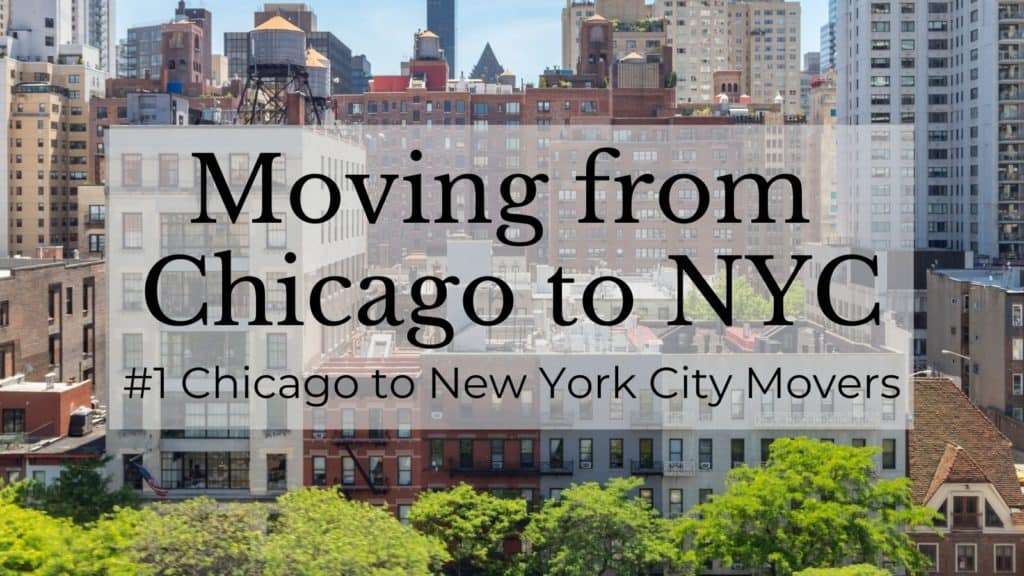 Moving from Chicago to New York City can be an exciting prospect, but you may also be feeling overwhelmed by an upcoming long-distance move. NYC is very different from Chicago and moving poses many logistical challenges – especially when it comes to driving a commercial vehicle in New York City and getting your belongings into a high-rise or walk-up apartment.

To give you peace of mind ahead of your upcoming relocation, here’s what you can expect when moving to NYC, the benefits you’ll enjoy compared to Chicago, and how a Chicago to NYC moving company can help.

If you’re considering hiring Chicago to NYC movers, you may be wondering what living in New York City will be like. New York is famous for its high cost of living, especially when it comes to housing. Most people living in NYC rent with an average rent in New York City of $3,039 (down 15% in 2020) that ranges a great deal depending on where you live. In Manhattan, for example, the average rent is over $3,800! By comparison, Chicago seems affordable with an average rent of $1,800 according to RentCafe.

In some ways, the culture of Chicago and New York City are similar. However, you’ll find that you can truly be anonymous and enjoy greater freedom and privacy in New York City. Some people find this very empowering. Living in NYC also means you’ll get used to walking – a lot – but that’s definitely a good thing. You’ll find yourself walking on a daily basis to nearby parks, restaurants, galleries, work, and between subway stations to live a more active lifestyle.

New York City is a city that is known for its tolerance, acceptance, and diversity. You’ll meet people from all walks of life after moving to New York City. The population of New York City is 8.4 million within 306 square miles. It’s the most densely populated metro area in the U.S. and 40% of the population was born outside the country! There are 3.2 million foreign-born residents in New York, more than any other city in the world, with up to 800 languages spoken. NYC’s diversity extends beyond nationality. New York is racially diverse at

New York City is home to many of America’s largest groups of many ethnic minorities and nationalities, most notably its communities of Jews, Italians, Puerto Ricans, Indians, Koreans, African Americans, Chinese, and Irish Americans. New York City also has a large LGBTQ culture with one of the world’s largest populations of gay, lesbian, bisexual, and transgender residents.

No matter where you come from, your beliefs, or your interests, you’ll find a sense of community and belonging after moving to NYC.

Considering moving from Chicago to New York City? It’s easy to see why! When you compare Chicago vs. New York City, you’ll find that NYC is like an upgraded version of the Windy City with a bigger theatre and arts scene, a denser urban environment, better weather, more to do, and better public transportation.

Maybe you’re moving to NYC for the stronger economy and better job opportunities. Perhaps you’ve compared the Chicago vs NYC crime rate and want to live somewhere safer. After all, Chicago is one of the most dangerous cities in the U.S. In one recent year, Chicago had more homicides than New York City and Los Angeles combined!

The Chicago climate is another contributing factor to many relocations. Are you tired of freezing cold winters in Chicago? One of the benefits of living in New York City is milder winters with temperatures an average of 9 degrees warmer than Chicago. New York City weather is more mild than Chicago year-round with pleasant summers and enjoyable falls.

Another one of the top benefits of moving from Chicago to New York City is the easy transportation. NYC has one of America’s best public transportation systems with well-developed train and subway systems that let you get anywhere without a car.

Comparing the lifestyle and attractions in Chicago versus NYC can also push the scale in New York’s favor. New York City never sleeps with lounges, rooftop bars, clubs, and restaurants around every corner. It boasts some of the world’s most famous attractions, art galleries, and museums plus nearby beaches and the magnificent Central Park. When you get worn out by the hustle and bustle, you can get out of New York City and into pristine nature surprisingly easily!

Of course, there are some drawbacks to moving to New York City to keep in mind. Even Chicagoans can be shocked by the high cost of living in New York that makes Chicago look affordable in many ways. You may find that New Yorkers put more focus on appearances, too, as the New York Times once described Manhattan as “where thin people roam, and sometimes even eat.” Some people who move to NYC from the Midwest complain that New Yorkers seem inauthentic, pretentious, and rushed – but you’ll definitely learn that New Yorkers are much more friendly and welcoming than you expected. You may also find yourself missing Lake Michigan and walking down sidewalks without throngs of people.

Set on moving to New York City but want to skip the stressful, time-consuming packing, back-breaking manual labor, and difficult drive? Professional Chicago to NYC movers can make your long-distance move easier than you imagined possible.

A long-distance Chicago to NYC moving company has the right equipment, expertise, and experience needed to safely and efficiently handle every aspect of your relocation. Here are the top benefits of hiring professionals for your upcoming move from Chicago to New York:

One benefit requires special discussion. With Chicago to NYC movers, you don’t worry about parking & driving a moving truck in NYC. This is a MAJOR perk if you’ve ever seen NYC’s tiny residential streets and congested roads. For high-rises, this usually involves using a loading dock. There are also strict NYC parking regulations for moving trucks with just 3 hours allowed for loading/unloading. Moving trucks are not allowed on New York parkways and there are some segments of roads in NYC that do not allow commercial vehicles. This means you can’t rely on a GPS when driving a truck in NYC.
If that sounds like a headache you would like to avoid, you’ll definitely appreciate the perks that come with choosing professional Chicago to New York City movers to help you.

Why Federal Companies Is the Best Chicago to NYC Moving Company

Ready to invest in the peace of mind you’ll enjoy with professional Chicago to NYC movers? Make sure you choose a moving company you can trust with experience performing complex long-distance relocations, particularly in New York City. Always look for: 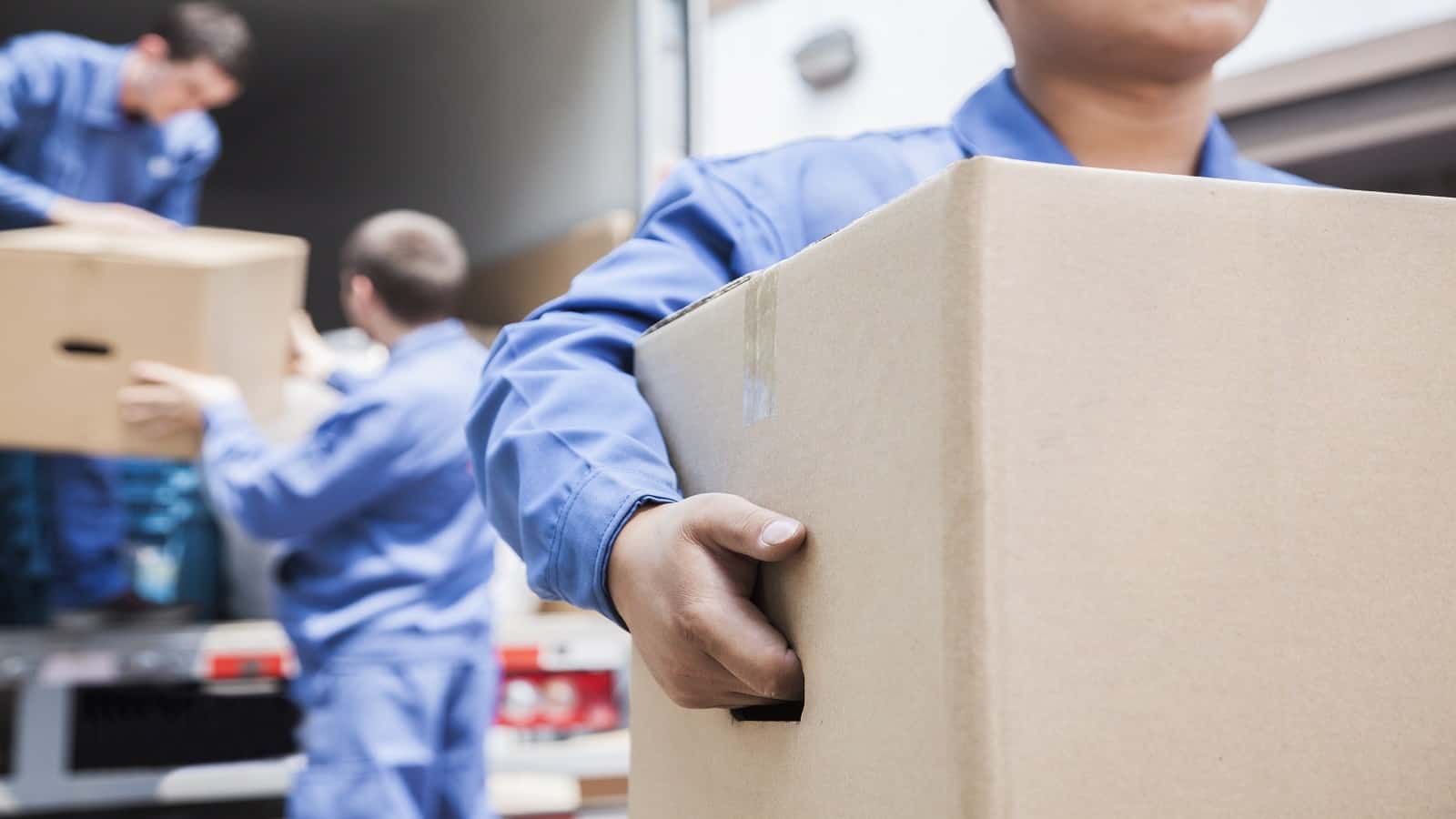 Federal Companies is an award-winning long distance moving company in Chicago founded in 1913. We deliver over a century of experience helping customers with relocating from Chicago to New York City with an A+ BBB rating and Certified ProMover status. Check our 5-star reviews on Google based on more than 200,000 successful moves performed by our trained, background checked movers then call us for a free estimate!

How much does it cost to move from Chicago to NYC with a moving company? Not as much as you may guess. Your moving rate will be based on major factors like:

To find out your moving cost, call Federal Companies today for a free Chicago to NYC moving estimate. We offer virtual and in-home assessments for your convenience!

When you hire movers for moving from Chicago to NYC, you save yourself many hassles and worries. Among them is driving a large moving truck hundreds of miles and the unbelievable challenges of driving a truck through NYC’s tight streets. Once your belongings are loaded and on their way, you still need to plan for how you will get your family and pets to your new home in New York City.

The distance from Chicago to New York City is 790 miles or 12 hours and 15 minutes driving. If you choose to drive from Chicago to NYC, you’ll make the entire trip along I-90 E and I-80 E. Be aware you’ll travel along six toll roads including the costly Holland Tunnel toll of $16. Note that Holland Tunnel is now cashless. You can join E-Z Pass online ahead of your move to save on New York City tolls!

Ready to embrace New York City living and ditch the car? NYC is the second-best city for car-free living and more than half of New Yorkers do not own a car compared to fewer than 9% of households nationwide. There are other options for moving from Chicago to NYC if you aren’t taking a vehicle or having it shipped.

One of the most exciting ways to relocate from Chicago to New York City is by train on Amtrak. The Lake Shore Limited train route from Amtrak travels from Chicago to Boston with a stop in New York City. Enjoy comfortable accommodations in a private room with a private restroom and shower plus complimentary meals for around $400 per person or coach tickets for $90 per person.

Ready to enjoy everything life has to offer while living in NYC? The award-winning Chicago to NYC movers at Federal Companies are here to deliver the stress-free relocation you deserve. Ditch the stress and give us a call for a free moving estimate today.