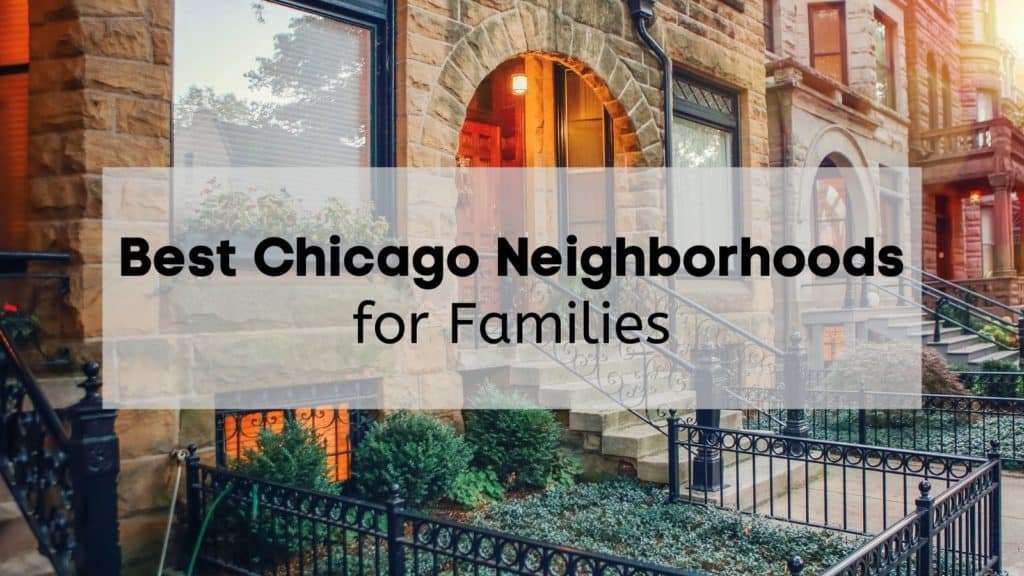 So you’ve decided that Chicago is the next best step for your family – how exciting! Whether you are familiar with the area or have never stepped foot in Illinois, figuring out where to settle might be a challenge. You probably have so many questions, like where can I raise a family in Chicago or does Chicago have good schools? Well, we want to make sure you are confident with the neighborhood you and your family decide to live in. That’s why we’ve made this list of the best Chicago neighborhoods for families.

In our discussions of the best Chicago neighborhoods for families, we will discuss what it’s like to live in each so you can decide what suits your family’s needs. For example, we’ll cover school districts, walkability, parks, and kid-friendly amenities. We won’t forget about the parents either, though. We also cover things like nightlife and distance to downtown Chicago. This guide will help you figure out where to call home in this amazing city.

Edison Park – The Safest Neighborhood To Raise a Family in Chicago

The Edison Park neighborhood stands out for being one of the safest neighborhoods near Chicago. Many residents feel comfortable walking around at night since it is very well-lit, there are plenty of sidewalks, the community is peaceful, and it is very close to many police and firefighters. The people that live there are very family-oriented and all are looking to raise their children in a quiet, safe environment. Don’t mistake quiet for boring, though. Edison Park has plenty of activities and entertainment going on in the area, including art classes in the park and kids’ activities year-round. You’ll be able to find beautiful playgrounds at both Brooks and Olympia park, which are just a short walk away. If that’s not enough for you, you are only about fifteen miles out from the city. The Edison Park elementary school is at the heart center of the neighborhood, and there are many highly rated high schools nearby. The culture and diversity in the neighborhood, however, are lacking.

Even if this neighborhood is on the high end of your budget, it might be worth it. In North Park, you can find endless dining, activity, and entertainment options for everyone. Take the family bowling at the well-known Timber Lanes or go to one of the many nearby parks with the kids. Afterward, catch a game at The Globe Pub, explore the many bars in the area, or get a babysitter and take a quick seven-mile drive to the heart of the city for a night out. Make sure to check the event calendars too, because there are always annual fests, arts, and sporting events going on. The neighborhood is very active in the community, too. Just check out North Center Neighborhood Association and look at all of the cool things they have going on. With all of the kid-friendly events and schools in the area, North Center is a great place for young families who still enjoy some nightlife.

The North Park neighborhood, named after the nearby North Park University (a small liberal arts college), is home to students and professors, as well as young families. Apart from the University, the neighborhood is surrounded by good schools, including Northside College Preparatory High School which was rated one of the best high schools in 2021. North Park’s culturally rich background brought cuisines from all over the world – think specialties from India, Mexico, Korea, Vietnam, and so much more. The best part is it’s all walkable to most of the residents (try living by W. Foster street). Plus, if you are up for a short twelve-mile drive, you can find yourself at the center of the city. This neighborhood is also known for its green spaces, such as the North Park Village Nature Center and LaBagh Woods, where the trails go along the Chicago River. Being a little dry of nightlife, North Park is peaceful and safe.

As the name suggests, the Edgewater neighborhood hugs Lake Michigan’s waters edge for miles. The family-friendly neighborhood is located just over nine miles from downtown Chicago and offers plenty of beach, green space, and nearby parks and playgrounds for the whole family. You don’t need to leave the dog at home either since the area is known for being very dog friendly. On top of that, the neighborhood is very walkable. With plenty of sidewalks, in just a few minutes, you can find yourself in antique and vintage shops or eating at global cuisines. You’ll really be able to feel the sense of community in this safe, yet active neighborhood. The neighborhood rests in the Chicago Public Schools District and all the schools here are decent, there isn’t one that stands out from the rest.

History buffs, this community is for you! Located right on Lake Michigan, the Hyde Park neighborhood is surrounded by rich history. On one end you have the Museum of Science and Industry, on the other end, you have the University of Chicago Campus, where you can find Gothic architecture, the Smart Museum of Art, and more. Don’t forget about the DuSable Museum, dedicated to African American history. Did you know it was former President Barack Obama’s home, too? On top of being historical, this neighborhood is walkable, has parks nearby, and has quiet nightlife. Since it is a college neighborhood, there is no lack of libraries, bookstores, and entertainment. Plus, if you somehow run out of things to do, you are less than seven miles away from the center of the city. Although safe, there are neighborhoods South and West of Hyde Park that would be best to stay away from. It’s best to stay need the U of C campus. This racially and culturally diverse neighborhood is perfect for families looking to take in the history of where they live.

Born from Irish roots, the Beverly neighborhood is located about fifteen miles south of downtown Chicago. It is usually described as a big-city neighborhood with a small-town feel given it has large homes, big yards, and tree-lined streets with sidewalks. What Beverly lacks in nightlife, it makes up for in amenities and entertainment. Beverly is home to several Frank Lloyd Wright houses, arts center, and galleries, and The Dan Ryan Woods, which is a 257-acre forest preserve with playfields, sledding hills, and paved trails. There is a variety of both public and private schools in the area, check out the Beverly/Morgan Park Schools in the area.

The Forest Glan/Sauganash neighborhood is one of the higher-priced family-friendly neighborhoods in the area. However, paying the price gets you the perks. The neighborhood has plenty of community involvement, including scout groups, holiday festivities, beautification and community associations, churches, and so much more. The area is considered very quiet, slower-paced, and safe with a police station right in the neighborhood. There are many highly rated public and private schools, including Sauganash Elementary. Even though you may need to travel a little closer to the city (which is only about twelve miles) for luxurious dining, shopping, or entertainment, there are plenty of activities close by to keep your weekends busy.

If you have kids but still want to have traditional city living, the Lincoln Park neighborhood is perfect for you. Even though Lincoln Park is only about five miles north of Chicago, there is plenty of green space. Since there are so many other families around, there are plenty of kid-friendly activities, such as parks and the well-known Lincoln Park zoo. The best part about the area for families, however, is the elementary schools. Prescott Elementary even received the National Blue Ribbon School Award for the Department of Education. If you can afford to live here, it’s a safe and upscale neighborhood right next to the city.

Just like any other city, raising a family in Chicago can have its challenges, but no matter the neighborhood you choose, you won’t regret moving to the bustling city of Chicago. Whether you are just starting your family, or are about to send them off to college, the best and safest neighborhoods for families in Chicago offer a wide variety of attributes to make just about everyone happy. Ready to move to Chicago? Call Federal Companies to experience a stress-free move at 309-690-0000. Chicago is excited to have you, and we hope you are excited to make it your new home!