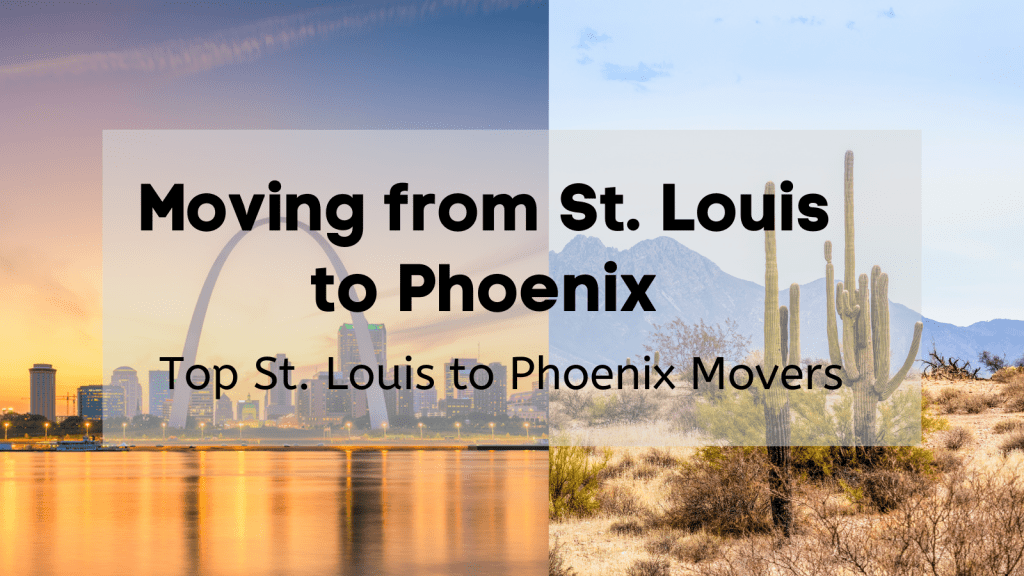 Congratulations on deciding to move from St. Louis to Phoenix! Whether you’re relocating for work, school, to be closer to family, or simply to experience a different city, you’ll love your new locale. You may be experiencing excitement mixed with apprehension since this is a long-distance move. Selecting the best interstate moving company to help you seamlessly relocate from St. Louis to Phoenix will streamline the process and ease any nerves.

Phoenix is the capital of Arizona and it has garnered a reputation for its sunny, warm climate, high-end spas, myriad of golf courses, and exciting nightclubs. Phoenix is Arizona’s most populous city with 1.6 million residents. It’s located in the Southwestern United States and parts of the state border the border of Mexico. The median household income in Phoenix was $60,914 according to the 2020 Census and the median home price is $440,000. The average cost of rent in Phoenix is $1,590.

Moving from St. Louis to Phoenix – What You Need to Know

There are various benefits associated with relocating to Phoenix from St. Louis. Here are some of the main reasons people decide to give the wild west a try.

People love Phoenix’s food scene as well as the eclectic melting-pot vibe where people from a myriad of cultures come together and celebrate this oasis in the desert. Whether you’re seeking a casual vibe or something more up-and-coming, you can find it in Phoenix.

Phoenix boasts a variety of things to do — from botanical gardens to golf courses to museums. This makes it an ideal place to relocate with a family.

Phoenix is home to over 200 public school districts, and there are over 400 charter and private schools that service students aged kindergarten to 12th grade. St. Louis does also boast a successful city school district.

Phoenix has the Valley Metro Transit System to help its residents get around the metropolitan area. St. Louis has a similar feature: MetroBus.

Long distance moves are complicated, which is why working with an established, professional moving company to relocate your possessions from St. Louis to Phoenix is necessary. Your moving company will ease the stress of relocating in various ways. For starters, the entire move is coordinated by a trained, experienced staff member who understands how to make a long-distance relocation successful.

You’re not moving around the corner, so packing your items accordingly is necessary. Working with a trained crew will ensure all your possessions arrive in one piece, thanks to proper boxes and packing supplies. Your movers will also place all of your belongings into these boxes. From there, the team will place all of your items into the truck. If you need to store items until your new home is ready, Federal Companies can work with you to safely store your possessions.

When the truck arrives at your new residence in the Phoenix metro, the licensed, ensured crew will unload all furniture, boxes, and belongings. The furniture will be assembled without you having to lift a finger, and you can opt for boxes to get unpacked and belongings to get arranged.

Your team will also place furniture where you want it, and is responsible for the successful disassembly and reassembly of your possessions. The crew can also help relocate your appliances. To summarize, letting us perform your cross country move to Phoenix will reduce your stress, anxiety and save you time.

Why Federal Companies is Your St. Louis to Phoenix Moving Company Choice

St. Louis state to state moves can be overwhelming, which is why hiring a professional moving company is an excellent idea. However, you’ll have to make sure you select the right team for the job.

When selecting your crew, consider how many years in business, the number of customers served, and the number of employees. Federal Companies is the best choice for your St. Louis to Phoenix long distance move because it offers affordable, trustworthy service. Federal Companies has been the St. Louis area’s moving company of choice for over 105 years. The company is licensed and insured so you can feel confident that your items will arrive seamlessly. Federal Companies has served over 200,000 happy customers and boasts a team of over 200 trained, experienced out of state movers. You can also check out reviews.

Finding a good mover can be complicated, which is why choosing Federal Companies is an obvious choice. We use new, clean, properly maintained trucks to safely transport your possessions from St. Louis to Phoenix. This ensures delicate and expensive furniture arrives without damage. Furthermore, the Federal Companies crew receives rigorous training to ensure they uphold our meticulous standards of excellence.

To get an accurate assessment of your St. Louis to Phoenix moving cost, reach out for a free estimate. Federal Companies offers affordable services while maintaining a level of professionalism you won’t find elsewhere.

Until the team visits your home to give you a quote on your moving cost, it’s impossible to estimate how much relocating will cost. However, the price depends on several factors. These include the distance between your origin and destination, the weight of your possessions, your moving dates, additional services like packing, and whether or not you need storage.

Once the team has collected your items from your home in St. Louis and they’re en route to your new house, most people decide to drive, fly, or take a train to their new city. Here’s how you and your family can get from St. Louis to Phoenix.

You can also fly from St. Louis to Phoenix. You’ll leave from St. Louis Lambert International Airport (STL) and arrive at Phoenix Sky Harbor International (PHX). American and Southwest both service this route. The flight is significantly quicker than driving; direct flights are just over three hours in length. Tickets are approximately $313.

Because traveling from St. Louis to Phoenix by train takes over two days, people typically do not choose to take the train to relocate.

Get Ready for your St. Louis to Phoenix Move

Take the first steps toward preparing for your St. Louis to Phoenix long distance move by reaching out to Federal Companies. Give us a call at 309-690-0000 for a free quote.