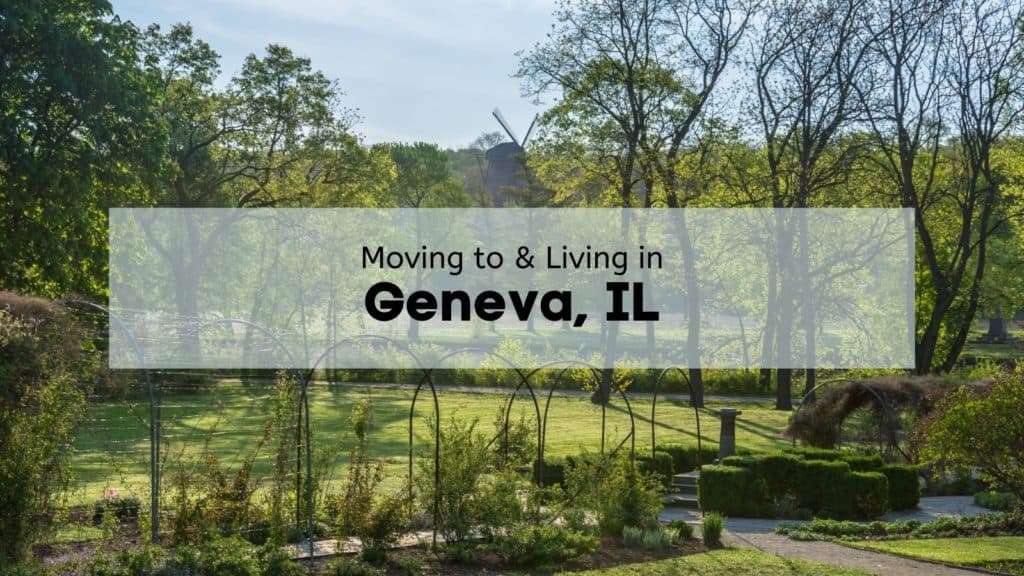 Why Living in Geneva IL is Great! 😃 | COMPLETE Moving to Geneva Guide

Geneva is a small to mid-sized upper-middle class suburb located in Kane County. Geneva is about an hour out of Chicago’s city center, and is located in the western edge of Chicago’s suburbs. The area is primarily known as a beautiful affluent community, renowned for its many examples of classical European architecture, such as its famous Fabyan Windmill. The area was settled in the 1830s, having been an important stop along the road to the then-infantile Chicago, and Fox River provided the town with most of its economic output. Geneva no longer produces cheese, butter, packaged meat, and other agricultural products, instead serving as an upper crust residential area for those more privileged Chicago residents. Geneva is also home to several notable people, like singer Niykee Heaton and comedy writer Michael J. Nelson.

The city of Geneva has a population of 21,888 distributed over 9.9 miles at a population density of about 2,000 people per square mile. The median age here is 43.2, which is marginally older than the Illinois average of 38.1. The median household income in Geneva is $111,916, about 1.5 times higher than the average household income for the state of Illinois, being $65,886.

Geneva’s population is a pretty homogeneous community, with whites making up 90% of the population. There are also small Hispanic and Asian communities, being 6% and 2% of this community’s population respectively. Geneva’s gender ratio is slightly skewed, with 53% of residents being female.

Geneva’s zip code is 60134, while the area code is 630 and 331. Geneva is about an hour’s drive from Chicago’s city center, and makes up a border community of the city’s western suburbs. While the commute to the city center might be too much for most, commuting within the city is still a possibility here.

Thinking about moving to this community, but wondering if Geneva is a safe place to live? With a stellar A+ rating on Areavibes, you won’t have to worry about being victimized by criminals in Geneva! A very safe place to make your home, crime here is 70% lower than the national average, with violent crime being 81% lower and property crime being 69% lower. You’ll be safe as houses in Geneva!

Cost of Living in Geneva, IL

As you might expect of a clean and safe community so close to a city, Geneva can be heavy on the wallet sometimes, with the cost of living here being 36% higher on average than other places in America, according to Payscale. Homes in Geneva will cost you around $689,767, which is almost double the national average. If you choose to move to Geneva, you’ll find that you’ll be paying less for things like utilities, but more for transportation and groceries. Geneva’s rental market is expensive, but not as expensive as other city centers in the country, with the average rent per month of $1,474.

Geneva might be a little costly, sure, but it’s hard to argue it’s not worth the price. A safe, beautiful, cozy community with a reasonable commute to a nearby city center is hard to put a price tag on in the first place. You’ll get lots of bang for your buck in Geneva!

Geneva is served by the prestigious Geneva Community Unit School District 304, quite a mouthful, where a whopping 2/3rds of the schools are rated “Above Average”. While not as diverse in options as some more urban areas of Chicago might be, you’re pretty much guaranteed to get something good. Some highlights in terms of local schools include the Fabyan Elementary School, with a 10/10 rating, Geneva Middle School, and Geneva Community High School, with a 9/10 rating. Rest assured, your child will be in good hands during your stay in Geneva!

Geneva’s climate could best be described as “average”. You’ll experience the average amount of rain, average amount of snow, and so on. If you know Cincinnati’s climate, Geneva will, naturally, not surprise you. You can expect lows of 15 degrees Fahrenheit during the winter months, and highs of 84 degrees Fahrenheit during the summer months. Geneva experiences exactly the average amount of rainfall when compared with the rest of the United States, with 38 inches per year. Meanwhile, Geneva experiences marginally more than the national average in terms of snow, with 30 inches as compared to 28. The best times to visit Geneva, in terms of comfort rating, are June and September.

While decently sized, Geneva is still a relatively compact community, and therefore doesn’t quite have all the distinct communities you’d expect out of a larger city. However, there are still particulars to get into before you make your move. Check out some of your neighborhood options below:

The eastern half of Geneva, around Kirk Road, is the most affordable of Geneva’s properties, likely due to its position right next to the DuPage Airport. Don’t fret if you’ve got your eye on a property there, though, as DuPage is a general aviation airport, not a commercial one, and therefore usually doesn’t serve much besides single-engine propellor aircraft. Meanwhile, the portion around the Eaglebrook Country Club hosts some of Geneva’s most expensive housing.

If you want to make yourself a part of any of these communities, you should check out the latest listings for homes for sale in Geneva, IL.

If you need directions to travel from Geneva IL to Chicago, click here. It’s a 40 mile, 50 minute drive.

Those planning on making a living in Geneva should know that wages have been relatively stable while cost of living has increased, according to Payscale. The most popular positions of employment are Mechanical Engineer, Marketing Manager, and Retail Store Manager. The largest employers in the area are Burgess-Norton, FONA International, and Lineage Logistics Holdings, LLC. The average salary for a worker in Geneva is $63k a year, while the average hourly wage is $19.26.

Things to Do in Geneva, IL

As you’d expect with a community as cultured as Geneva, there’s lots of shopping and attractions for all sorts of folks. Check out shopping centers nearby like the Geneva Commons for all your shopping needs! You should also check out some of the best things to do in Geneva, IL below:

Just a hop, skip, and jump from the Fabyan Forest Preserve is the Fabyan Villa Museum & Japanese garden. Formerly owned by George and Nelle Fabyan, for whom the whole area is named, the villa has now become a museum on local Geneva culture. A fun little trip for the whole family!

Places to Eat in Geneva, IL

Alongside its host of things to do, Geneva is also home to plenty of great eats! Check out some below:

With a spacious, industrial-style bar environment, this trendy and hip burger place serves gourmet versions of America’s favorite food, alongside equally hip and trendy drinks and cocktails. A perfect place to chow down on a burger in Geneva!

It seems that if there is any sort of settlement of people in the United States, a Mexican restaurant must naturally also be set up there. Bien Trucha is a particularly delightful example of this phenomenon, with hand-shaken cocktails alongside their delicious Central American fare. If you’re craving the tastes of Mexico, Bien Trucha is your spot in Geneva!

Ready to take that last step and start your journey to making Geneva your new home? Give Federal Companies a call! Our crew of highly-trained professional movers will ensure your move is a stress-free process at affordable rates! Call now or fill out our online form for a free quote!