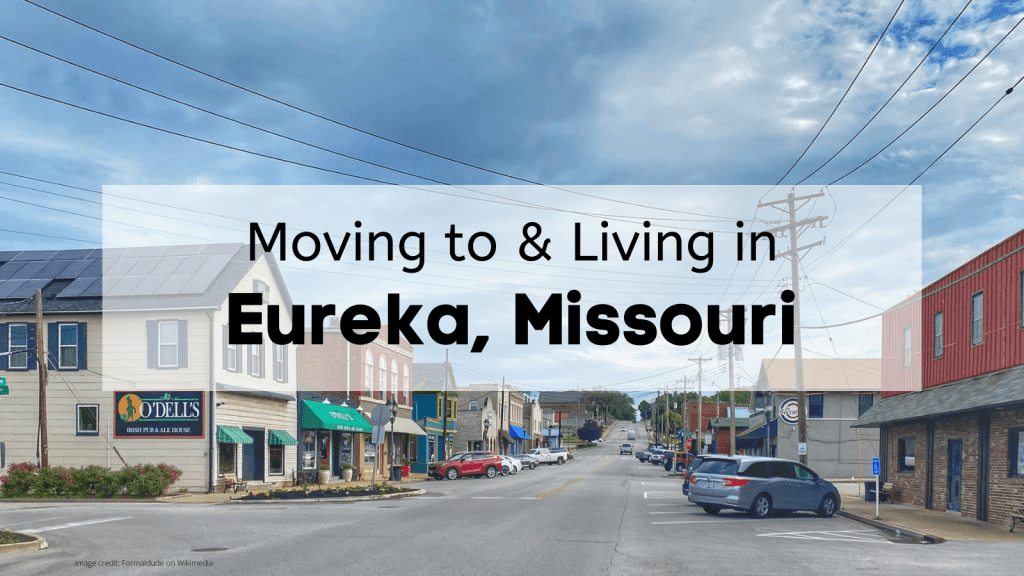 The city of Eureka, MO offers a desirable small-town feel yet is a commutable distance to nearby St. Louis. Eureka is known for being home to the St. Louis location of Six Flags, a popular amusement park chain. It also has a small, nostalgic downtown area.

The first inhabitants of the Eureka area were members of the Shawnee Native American tribe. By 1890, Eureka was a successful village of approximately 100 homes. These houses were surrounded by fruit and agricultural land. It was finally incorporated in 1954 and at the time was approximately 2.7 square miles. It has experienced several annexations over the years. Today, it’s about 9.35 square miles. Today’s residents enjoy its proximity to St. Louis and the sense of community.

Where is Eureka, MO?

Eureka is a suburb of St. Louis. It is in St. Louis county in the state of Missouri. The city is just 27.5 miles from St. Louis (about 32 minutes by car). For those looking to enjoy small-town life but want the convenience of living near a larger city, Eureka is a great place to live.

Eureka was named such because the railroad builders came around the bend on the eastern side of the city. They looked west at the level land with very little dirt and no rocks to move — ideal for building a railroad. They shouted out, “Eureka!” This translates to “I’ve found it!” in Greek. The city’s name was born.

Eureka borders Wildwood to the north, and Hoene Spring to the South. To the west of Eureka there’s Pacific, and to the east there’s Crescent.

The population density is 1,108.09 inhabitants per square mile. The annual growth rate in Eureka is 1.24%.

There are quite a few famous people who call Eureka home. TV personality Clayton Echard from the Bachelor hails from Eureka. Other notable individuals include MLB player Bob Klinger and Rissi Palmer, a country singer.

Eureka’s total crime rate is 15.37 per 1000 residents. In Eureka, the property crime rate (14.68) is higher than the violent crime rate (.69) too, which is considered a positive. Therefore, Eureka is a safe place to live.

Eureka is serviced by the Eureka Police Department which employs 26 officers.

Cost of Living in Eureka

If you have a family of four in Eureka (two children and two adults), you’d need to make approximately $80,992 per year to live comfortably, according to the Economic Policy Institute. You can expect to pay $938 per month on housing, $788 on food, $1164 on transportation, $1226 on healthcare, and $1250 on childcare.

Eureka Neighborhoods | Where to Live in Eureka

There are three main neighborhoods in Eureka: Forby/Emerald Forest, Allenton/City Center, and Lake Tekakwitha/LaBarque Creek. Forby/Emerald Forest is largely considered the most desirable one, however, City Center does earn points for convenience, as you’ll be closer to the downtown area.

Eureka, MO is in the midwestern United States. Eureka does experience all four seasons throughout the year. On average, the city receives 44 inches of rain per year, which is higher than the US average. If you’re living in Eureka, be sure to bring your rain boots with you! It does snow in Eureka; on average, it snows 12 inches per year here.

Eureka’s summers are muggy and hot and the winters are chilly and snowy. The weather typically ranges between 24 and 89 degrees Fahrenheit throughout the year. It hardly ever falls lower than 8 degrees or higher than 97.

Things to Do in Eureka

There are plenty of things to do in Eureka, whether you’re looking for a family friendly activity or a romantic night out on the town with your partner. Or, you can embrace your inner tourist by visiting some of the spots that attract out-of-towners. If you’d like to spend some time shopping you can do that too by visiting Eureka Towne Center.

Here are some of our favorite things to do in Eureka, MO.

If you have a child, Six Flags is an excellent activity to do in Eureka. If you’re based in Eureka, the trip to get to the park is quick and easy. Plus, there are plenty of great rides that will keep your child occupied all day.

Channel your inner tourist by visiting the Route 66 State Park. You’ll take a journey through American history and learn more about this famed road. This is the site of the original Route 66.

If you’re a fan of antiques, you can’t miss out on stopping by the Great Midwest Antique Mall. This highly rated spot has a plethora of items to choose from so you’re sure to find something you love no matter what your tastes are.

Eureka is home to a variety of unique restaurants that are ideal for any taste. Whether you’re looking for a great dish of Italian food or something more spicy, you can find it in Eureka. Here are a few of the best Eureka restaurants.

Eureka is close to St. Louis, so many people who live there decide to commute into that city for work as there are plenty of economic opportunities. Commuters find that the small town feel Eureka offers is worth the extra few minutes in the car.

However, if you’re not looking to commute into Salt Lake City for your role, you can find one in or around Eureka itself. Here’s a job board that can help kick-start your search for a role in Eureka, MO.

The top employers in Eureka include AT&T Telecommunications, Walmart, RotoMetrics, and Marymount Manor.

According to Payscale, the average hourly wage in Eureka is $15.40.

If you’re considering moving to Eureka and you have school-aged children, you may be curious to learn more about the school district. The city is serviced by the Rockwood R-Vi School District which has five schools. A total of 22,268 students attend the district as a whole.

Discover the suburban town of Eureka, MO, which offers a small-town feel and big city convenience.

If you’re considering moving to Eureka, you’ll enjoy this suburb’s proximity to a larger city and tight-knit community feel. If you’re ready to make your move to Eureka, give our Eureka movers a call at 309-690-0000 for a free quote.