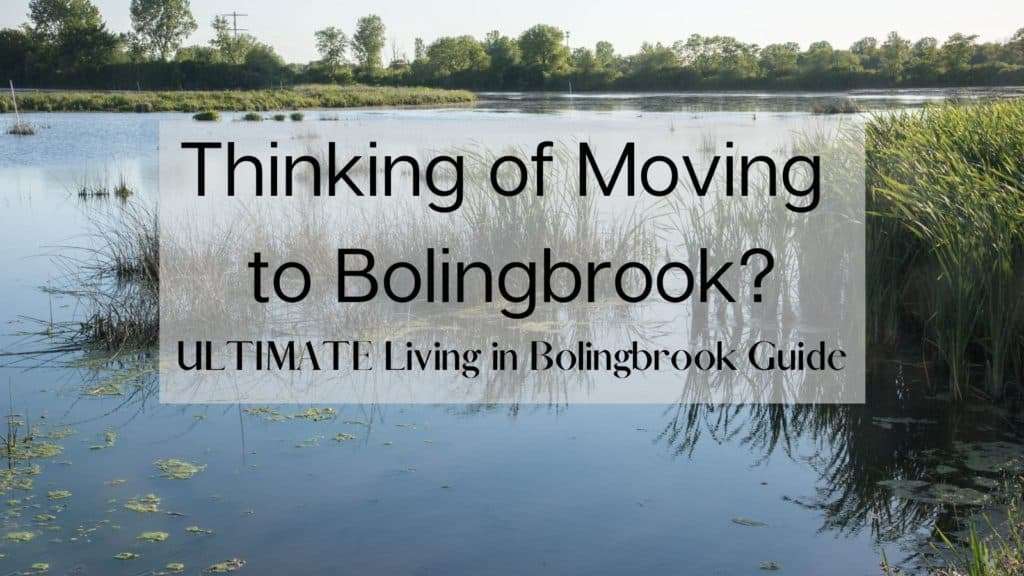 Thinking of Moving to Bolingbrook? [2022] | 🏆 ULTIMATE Living in Bolingbrook Guide

Are you looking for a safe place to live near Chicago? The charming village of Bolingbrook boasts one of the best qualities of life in Metro Chicago. Bolingbrook is known for its safety, affordability, diversity, and great outdoor recreation. There’s so much that makes living in Bolingbrook worthwhile, from attractions like Pelican Harbor to a relatively short commute to work in Chicago. While you’re never far from the amenities of the big city, you can enjoy comfortable suburban life with great schools and lots of open space. Here’s why moving to Bolingbrook is a great idea!

How many people live in Bolingbrook and who are they? The population of Bolingbrook is 74,500. The village is very diverse with a racial and ethnic composition that is 64.5% white, 20.5% African American or Black, 6.5% Asian, 5.5% other races, and 13% Hispanic. About 24% of Bolingbrook residents were born outside the U.S. with a foreign-born population that’s higher than Metro Chicago and the U.S. average.

Bolingbrook, IL is located in Will and DuPage counties about 29 miles southwest of Chicago near Naperville. The village has almost 25 square miles of land with I-55 (the Stevenson Expressway) running through the southern portion and I-355 (the Veterans Memorial Tollway) running along the east side. Bolingbrook is located in zip codes 60439, 60440, and 60490 and area codes 630/331 and 815/779.

What’s the weather going to be like while living in Bolingbrook? You can expect 30” of snow and 39” of rain every year, both close to the U.S. average. Bolingbrook gets about 187 sunny days per year with 122 days of precipitation.

The Bolingbrook climate is generally very comfortable although winters can get chilly with an average January low of 15 degrees. In July, the average high temperature is 84 degrees, cooler than much of Illinois. There are about 8 days per year in which temperatures exceed 90 degrees.

Bolingbrook is also home to St. Dominic School, a Catholic private school serving grades PK to 8. Students can go on to regional Catholic high schools like Benet Academy in Lisle or Mount Assisi Academy in Lemont.

Considering higher education? While Bolingbrook does not have any colleges, there are almost 80 within 50 miles. Colleges and universities near Bolingbrook include:

The average salary in Bolingbrook is $63,000, according to Payscale, with an average hourly rate of $16.45. Bolingbrook is home to 24 corporate headquarters including Ulta Beauty, Computer Projects of Illinois, Diageo, WeatherTech, and Goya Foods’ Illinois division. The economy largely focuses on industrial, manufacturing, distribution, tech, and education.

Curious where you may work after moving to Bolingbrook? Top employers in Bolingbrook include:

What Is the Cost of Living in Bolingbrook, IL?

Is Bolingbrook, IL expensive? That’s an important question to ask as you consider moving to Bolingbrook. The good news is living in Bolingbrook is very affordable and actually just under the national average. The Bolingbrook cost of living index is about 97. You’ll pay about average prices for most living expenses including healthcare, groceries, transportation, and utilities.

This means that, while Bolingbrook is more expensive than average for Illinois, it remains affordable compared to most places in the U.S.

Planning to rent after moving to Bolingbrook? The average rent in Bolingbrook is $1,399 for an average 852 square feet, according to RentCafe. That compares to $1,943 in Chicago and $1,500 in Naperville.

Where will you live after moving to Bolingbrook, IL? The village is home to many popular subdivisions with Bolingbrook neighborhoods for all budgets. Here’s a quick look at some of the most popular neighborhoods in Bolingbrook depending on your budget and the lifestyle you’re looking for.

Indian Oaks is by far one of the best neighborhoods in Bolingbrook with the most recent sales. This subdivision features townhomes and single-family homes mostly built in the 1970s. You’ll find homes with 2 to 5 bedrooms in the Indian Oaks subdivision with up to 2,600 square feet of space. Prices range from $100k to $315k.

Bluebell Ridge is a popular ranch townhome neighborhood in Bolingbrook. These townhomes were built in 2019 by Hartz Homes with prices in the high $200s. The neighborhood is close to DuPage River Park East and Farmington Commons with a good combination of new construction and value.

One of the newest and most affluent neighborhoods in Bolingbrook is Americana Estates. The newer section of the subdivision was built by DJK Custom Homes and Northern Illinois Homes over the last decade. You’ll find a huge range of homes in this gated community next to the Bolingbrook Golf Course with up to 6 bedrooms and 7,500 square feet of space.

Top Things to Do in Bolingbrook, IL

Bolingbrook delivers a great quality of life with plenty of things to see and do. Whether you’re interested in top Bolingbrook attractions for kids or fun things to do in Bolingbrook on a warm day, you’ll never run out of activities. Bolingbrook is also home to convenient shopping like The Promenade Bolingbrook, Bolingbrook Commons, Market Square Shopping Center, Kohls, Target, and Jewel-Osco. You’re also close to the amenities of Chicago. Here’s what the 29.3-mile drive from Bolingbrook, IL to Chicago, IL looks like.

Here are some of the best activities in Bolingbrook to keep you busy.

A post shared by Bolingbrook Park District (@bolingbrookparkdistrict) on Jul 27, 2019 at 7:00am PDT

Catch the newest release at Bolingbrook’s upscale movie theater. It’s one of the best things to do in Bolingbrook on date night with leather reclining seats, gourmet snacks, and fun cocktails to enjoy during the movie.

Additional attractions in Bolingbrook include:

Portillo’s is one of Chicago’s most beloved chains for Chicago-style hot dogs, Italian beef sandwiches, and craft beer.

bd’s is one of Bolingbrook’s best casual restaurants with make-your-own Mongolian grill stir fry plus an all-you-can-eat option.

Have you settled on moving to beautiful Bolingbrook, Illinois? Call the trusted Bolingbrook movers at Federal Companies today to get started with your free moving estimate! We’re here to make moving day as easy and stress-free as possible.