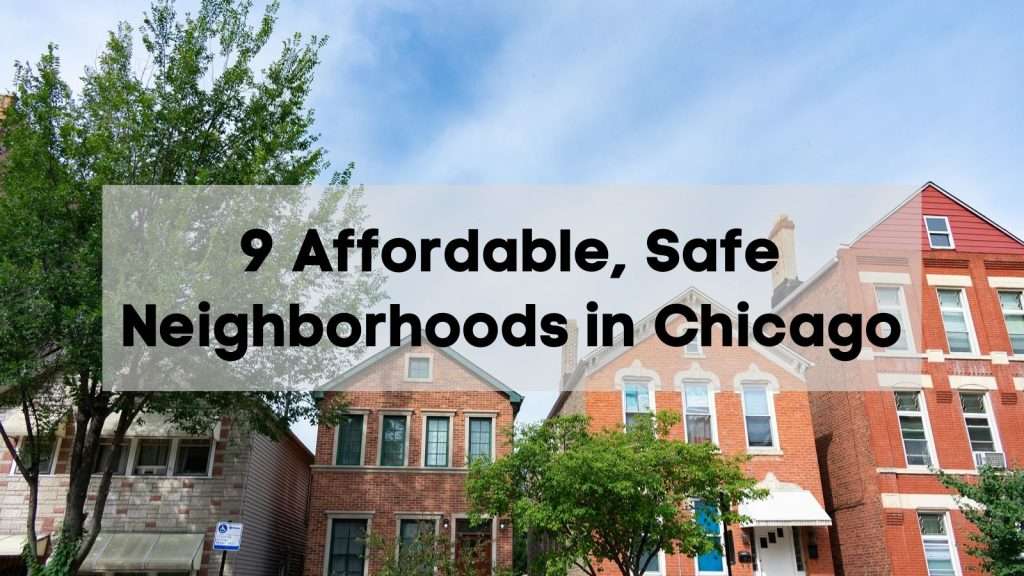 The Windy City is famous for its cuisine, museums, and world-class attractions, but living in Chicago doesn’t come cheap. The cost of living in Chicago is 20% higher than the national average, although that’s still affordable compared to many major cities like Seattle. If you’re struggling with increasing housing costs and inflation, or you just want to avoid being house poor and enjoy more disposable income, you’ll find many affordable Chicago neighborhoods that aren’t just cheap for the city – they’re affordable even compared to the rest of the country!

Before we go over eight cheap neighborhoods in Chicago that have a lot to offer, it helps to have some information for comparison. As a renter, you’ll pay $2,200 average rent in Chicago while the U.S. median rent just topped $2,000 a month for the first time ever. The median home price in Chicago is $310,000, far below the U.S. median of $455,000. Even better, reports suggest the Chicago housing market has more protection against a major drop in prices than most large cities.

Now, here are affordable, safe neighborhoods in Chicago that are well below the city average for rent and/or home prices. You can also check out our guide to affordable Chicago suburbs if you’re comfortable being further out of the city!

Located along the Chicago River just north of Logan Square, Irving Park is one of the many nice neighborhoods in Chicago for families that’s actually affordable. While the median home price is above average for the city, rent is nearly $1,000 below the Chicago average!

The neighborhood feels a lot like living in the suburbs thanks to its quiet, tree-lined residential streets, attractive older homes, and a strong sense of community. Families appreciate the farmer’s market in the summer and lots of green spaces like the central Independence Park with a pool and Kilbourn Park with after-school activities and an organic greenhouse. It’s also a great place to live for commuters and car-free households with two Metra lines and three stops on the CTA Blue Line, plus direct access to I-90 and I-94.

Along with the Heart of Chicago, Pilsen is one of two neighborhoods that makes up the Chicago Lower West Side. It was once one of the most dangerous areas of Chicago, but while it still has higher-than-average crime for the country, it now has crime well below average for Chicago, plus rent significantly below the city average.

Pilsen has been called one of the coolest neighborhoods in the world by Forbes (one of just two in the U.S. to make the list!) thanks to its cutting-edge art and music scene, vibrant Latino culture, and award-winning restaurants. Pilsen is the heart of the Mexican community in Chicago with colorful murals around every corner, some dating to the 70s, plus hip art galleries, trendy bars, and iconic music venues like Thalia Hall.

Pilsen is a great place to live for millennials and young professionals who want affordability combined with nightlife and a fun scene to explore. Residents love the neighborhood’s top attractions like the National Museum of Mexican Art, with over 5,000 pieces and free entry located in Harrison Park, the main community park with a rec center, playground, pool, and game fields.

Rogers Park is high on the list of cheapest Chicago neighborhoods with rent $900 below the city median and a median home price about $120k lower than the Chicago median. That’s definitely not all this often-overlooked neighborhood has to offer.

It’s one of the most northern neighborhoods along Lake Michigan with some of the best beaches in Chicago. Loyola Beach and Tobey Prinz Beach Park are popular destinations for morning runs, public art, and family-friendly days on the shore. Rogers Park is also home to Loyola University and a vast range of housing options including large apartment buildings, three-flats, and single-family homes. Rogers Park is an incredibly diverse neighborhood with over 40 languages spoken by residents!

The biggest drawback of life in Rogers Park is the crime which is lower than average for Chicago but still well above the national average.

The Chicago North Side is the most affluent area of Chicago known for its famous museums, Lake Michigan beaches, and Michelin-star restaurants. While most Northside Chicago neighborhoods are far from budget-friendly, Uptown Chicago is an exception. It’s one of the only affordable neighborhoods in Chicago on the North Side and offers the perfect location with access to Lake Michigan and Lincoln Park. The city has even made commuting from the North Side and Uptown area faster with upgrades to the Red and Purple lines!

Uptown is a paradise for renters looking for affordable lakefront apartments. Median rent is well below average for the city with a range of mid- and high-rise developments with amazing city and lake views. You’ll even find co-ops and condos within your budget with a median price below $300k.

Jefferson Park – Among the Safest Neighborhoods in Chicago with Affordable Apartments

Jefferson Park is one of the safest and most affordable neighborhoods in Chicago known for its rich Polish American heritage. Every summer, it hosts the Taste of Polonia, the largest Polish festival in the country, at the namesake park, plus the Jeff Fest Arts & Music Festival. You’ll find tons to explore in your new neighborhood from the historic Morgan Art Gallery to the Copernicus Center. The community is also known for its Polish restaurants like Andy’s Deli & Mikolajczyk Sausage Shop which has been serving traditional Polish sausage for over a century!

Mount Greenwood is one of the safest places to live in Chicago and one of the most affordable for renters and home buyers alike. Like many neighborhoods in the Chicago Far Southwest Side area, Mount Greenwood has a large Irish-American community with Irish pubs and many Catholic churches and schools. It’s home to Saint Xavier University, a sprawling private Roman Catholic university and known for its large population of firefighters and police officers. Mount Greenwood Park is a popular destination for families and couples with an outdoor swimming pool, playground, gym, gardens, and ice rink in the winter.

North Center seemingly has it all: affordable rent well below average for Chicago, very low crime, and tons of restaurants, nightlife destinations, and entertainment. North Center is home to many fringe theatre groups like Bughouse Theater and fun hangout spots like Waveland Bowl and the intimate Timber Lanes for bowling, Martyr’s for live music, and Richard Clark Park along the Chicago River, home to the WMS Boathouse for rowing.

Beverly is one of the best places to live in Chicago for families, thanks to its small-town atmosphere and spacious homes with large yards. Beverly has a homeownership rate of 76%, well above average for the country and especially Chicago, and over 70% of households are families. This desirable community for homeowners is known for its magnificent architecture with historic Gothic and Queen Anne homes. Despite being developed as a suburb, it’s well-served by public transit with five stops on the Beverly Branch of the Rock Island District Line.

Walkability, low crime, easy transit access, and affordable rent – what more are you looking for? Bridgeport is a unique find in Chicago with affordability yet tons of amenities and walkability. The neighborhood is famous as the home of the Chicago White Sox, who play at Guaranteed Rate Field, but it also boasts amazing restaurants and a growing art scene. Stop by the Chicago Maritime Museum with thousands of artifacts from Chicago’s maritime past, and the Bridgeport Art Center with creative space for designers and artists, exhibitions, and regular classes.

You’ll find a range of housing options in Bridgeport including small cottages, well-maintained row houses, and brick two-flats. About half of the homes in the neighborhood were built before the 1940s, but there are many options for newer homes.

Does one of these affordable Chicago neighborhoods seem perfect for you? Whether you’re buying a home or renting, Federal Companies can help you get settled into your new Chicago neighborhood by handling all the hard work. Give our friendly team a call today for a free moving estimate to get started!